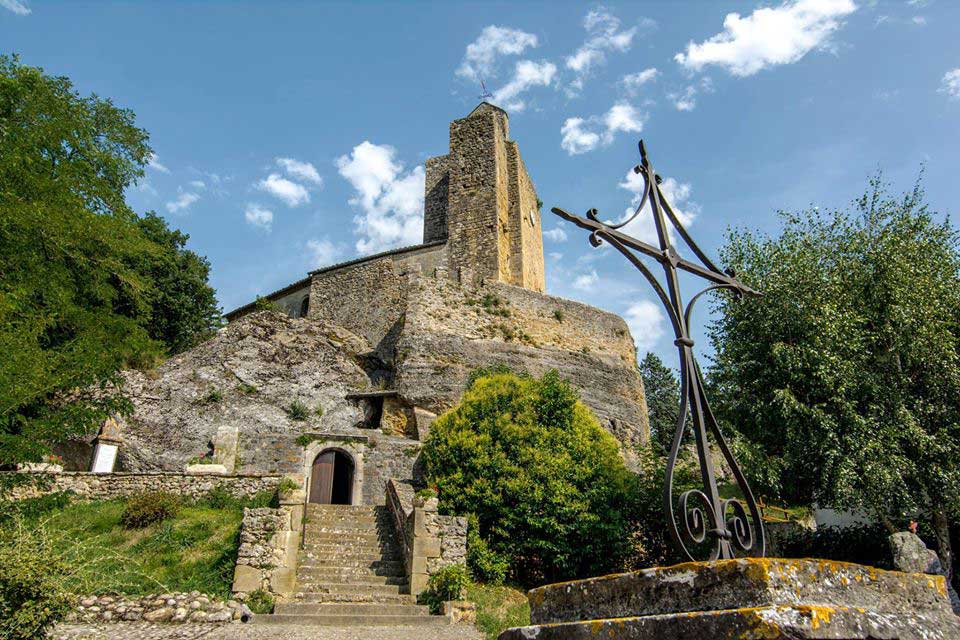 info_outline
You are here: Home / Regions / Occitany / 09-Ariège / The semi-rock church of Vals

The semi-rock church of Vals

The Church of Our Lady of Vals is a three-level semi-rupestrian church dedicated to the Virgin and is known for the Romanesque frescoes it contains, which are of great historical and artistic interest. Semi-rocky means that it is partly built into the rock. Numerous hypotheses have been put forward and some research points to a very ancient cult activity dating back to early antiquity, based on the discovery of small, thin-walled ceramics frequently found in places of worship.
The foundations of the church would date back to at least the 10th century, at the end of the Carolingian period.
The church appears in the texts in 1104 when the rector of Vals, Annibal Grasseries, became one of the canons regular of the church of Saint-Volusien in Foix. In 1224, Pope Honorius III confirmed the rights of the Abbey of Foix over the church of Saint Mary of Vals. But on 2 April 1445, a bull of Pope Eugene IV united the church of Vals to the mense of Pamiers Cathedral.
In 1887, the Marquise de Portes had the building raised.
In 1952, Abbot J.-M. Durand discovered the Romanesque frescoes under several layers of whitewash. From 1956, under the direction of Sylvain Stym-Popper, Chief Architect of the Historic Monuments, the frescoes are totally freed and partially restored. At the same time, major work was carried out on various parts of the building.
Its 10th century Carolingian nave, remains of the Mozarabic style, a 12th century bell tower, and a 14th century crenellated wall are all very original elements that deserve a wide visit.
Inside, in the first nave, you can admire representations of the apostles, Christ Pantocrator, the archangel Saint Michael...
In the second nave, two interesting stained glass windows depict Saint-Loup and Saint-Georges.
The upper nave (the tower), with its massive appearance, lit by Romanesque windows, looks like a keep.
A small triangular bell tower crowns the tower on which a cross, a weather vane and a wrought iron star can be seen.
A very old sandstone discoid cross adorns the outside of the tower.
Every year, on the last weekend in June, the "Artists' Walk" takes place. In buildings lent by the inhabitants and the municipality, as well as in the church, the works of various artists, mainly paintings and sculptures, are exhibited. On both mornings, a hike is organised along the country paths of the municipality.
From the terrace, a grandiose panorama covering all the Ariege Pyrenees is offered to you...
The upper part of the church is closed, by municipal decree, because of dilapidation.


From Pamiers or Mirepoix take the D119.
A signpost will show you the junction for the Church of Vals.