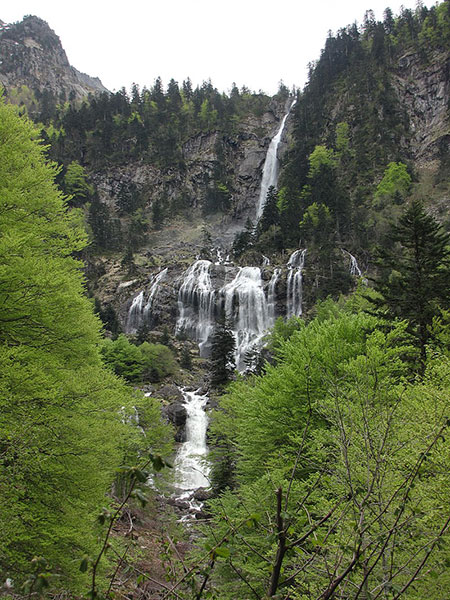 The Cascade d'Ars is one of the most beautiful waterfalls in the Pyrenees. The Count of Russel, a famous Pyreneanist of the end of the 19th century, placed it at the top of all the others.
Located at the start of the village of Aulus-les-Bains, a remarkable site of the Pyrenean chain, the Cascade d'Ars is 246m high in three successive stages.
It is at its peak in the months of May and June when the snow melts.
A must in the Couserans, the pedestrian access is open to the whole family in 3h30-4h round trip on a mountain path.
In Aulus-les-Bains, in the Garbet valley, cross the bridge in the direction of the Latrape pass and go to the first lace where the departure is. The path climbs up in a wooded valley without ever letting it be seen and suddenly, as you leave the woods, the waterfall appears, majestic.
Then, it is necessary to climb the 300 meters of difference in level that allow to pass from the foot of the waterfall, up to the summit: the Cap de Pich (1548m). The path goes along the waterfall and offers superb viewpoints at the different levels... One arrives then near the footbridge of Ars where one can blow a little bit. To continue Gr10 in the direction of the pond of Guzet which one reaches after more than 1 hour of walk. For the return, the descent on a very wide path and without difficulties, allows us to find again the route of departure.

It was taken by the ice in January 2021, which had not happened for a long time.