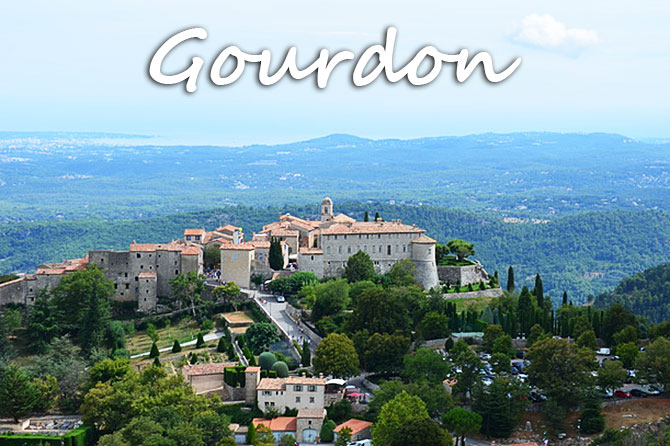 Visiting Gourdon is an adventure, you really have to want it. But this visit is really worth the detour.

Clinging to the top of a vertiginous cliff at an altitude of 760 m, Gourdon offers a real view on the Gorges du Loup and the Mediterranean Sea.

First, take the vertiginous Gorges du Loup, dominated by 700 meter high cliffs, taking the time to stop at the Saut du Loup waterfall before crossing the hamlet of Pont du Loup. Then you can choose to walk up to Gourdon, following the old "Chemin du Paradis", which used to be a mule track, with a difference in height of more than 500 meters...

Gourdon and its heritage

"Archetypal village perched in an eagle's nest at the end of a rocky spur, with an extraordinary panoramic view over more than 80 kilometers of coastline between Théoule sur mer and Nice, Gourdon forms a remarkably harmonious ensemble of medieval white stone houses that crowd around their feudal castle, surrounded by gardens designed by Le Nôtre, all perfectly restored and maintained... ".
The castle will be the highlight of your visit. Possession of the Counts of Provence until the 13th century, passed to the Grasse-Bar, then to the Villeneuve-Flayosc and Borriglione families, all or almost all the great noble families of the region have succeeded one another, and they have left their traces in this magnificently preserved castle.
You can admire its imposing round and square towers, its loopholes and Renaissance entrance door, its paved inner courtyard with well, its gargoyles and vaulted rooms, not to mention its monumental 14th century fireplace.

Inside, you can visit the superb gardens laid out by Le Nôtre, the landscape gardener of Versailles, with its terraces of honor shaded by hundred-year-old lime trees: you can admire an Italian garden and a rock garden, not forgetting the apothecary's garden, where angelica, columbine, balsam and comfrey, lemon balm, mints and old roses, sage and tansy are scented... all medicinal plants used in the Middle Ages.

Also to be seen in Gourdon, the chapels of Saint-Pons, Sainte Catherine, Saint-Ambroise, Saint-Vincent as well as the church of Notre-Dame dating from the 12th century but deeply modified in the 17th century.
You should take advantage of your stay in Gourdon to visit the remains of a Roman camp with double enclosure and oppidum, the prehistoric caves of Garagaï, on the road to Grasse, as well as the fortified rock shelter in the cliff of the fortress. Not to mention its Historical Museum of Medieval Art and naive painting.

To be complete, it is necessary to mention the famous people having a link with Gourdon.
Armand Fallières first of all, President of the Republic who came on April 28, 1909 with Georges Clémenceau, Prime Minister.

Jacques Higelin, who in 2010 sings Gourdon under the title "Aout put" of his album Coup de foudre.

Queen Victoria, Queen of England who stayed in Gourdon on April 19, 1891..., a square in the village named after her offers a breathtaking panorama of the whole river.

Gourdon is one of the "Most Beautiful Villages in France" and has two flowers in the "Concours des villes et villages fleuris". Many craftsmen animate the streets: perfumes and soaps, honey, nougat and gingerbread, glassware and silk painting...