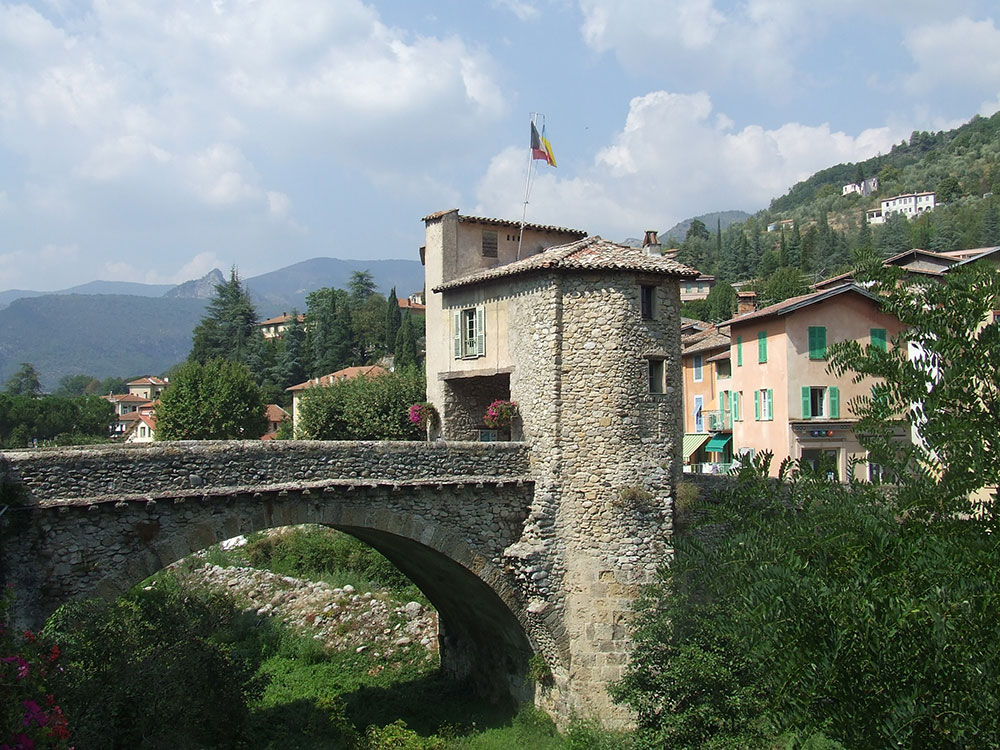 Situated in the Bévéra Valley, nestled at an altitude of 350m, south of the Mercantour National Park and the Vallée des Merveilles, Sospel is a very picturesque village offering a foretaste of nearby Italy.

This commune of 3000 inhabitants, which is 40 km from Nice and 15 km from Menton, belonged successively to the County of Ventimiglia, to that of Provence in 1258, then to the County of Savoy.
The village was once an essential stopover on the "Salt Road" which linked Nice to Turin.
Travellers who used it had to pay a toll when they crossed the Bévéra at the Pont Vieux, the emblem of the town.

To visit Sospel is first of all to see the Old Bridge. Today, this 13th century fortified bridge has become one of the last fortified bridges in Europe. It spans the Bévéra river and cuts the commune in two parts. Built in wood in the 13th century, it was rebuilt in stone in 1522. Damaged in 1944 during the Liberation, it was entirely restored.
In addition to its two arches, it is characterized by a central tower which would have formerly served as a toll station on the Salt Road.

Also worth seeing is the Place Saint Michel, where you will find the Saint-Michel Cathedral, a baroque style church, but flanked by an older bell tower dating from the 11th century. The street leading to it is home to houses with beautiful geminated windows or mullioned windows.
The Saint-Michel cathedral, which stands on a square paved with white and grey pebbles forming original patterns, has recently been restored.

It houses a remarkable work of art, the altarpiece known as the "Immaculate Virgin".
This three-part altarpiece was made in 1520 by François Bréa, a member of a family of painters from Nice.
On the Place Saint-Michel, you can also admire Gothic houses on arcades with trompe-l'oeil decorations.
Also worth seeing are its fountains and facades in the traditional Ligurian colours of pale pink and yellow, and the Place Saint-Nicolas, a medieval square surrounded by arcades where the former municipal palace is located.

This square paved with colourful pebbles will lead you, following the Republic Street, to the 17th century baroque chapel of Saint Cross, which hosts baroque music concerts in summer.

Sospel, Historical City, is also one of the most fortified Maginot sites in France. The Fort Saint-Roch museum allows visitors to discover one of the most modern generations of fortifications. 5000 m3 of concrete and 385 tons of steel contributed to the construction of this fortress.

In addition to Fort Saint-Roch, Sospel is home to the Barbonnet and Agaisen Forts, reinforcing the defensive system of the Bévéra Valley.

Finally, it is necessary to visit at Sospel, the innumerable chapels, chapel of White Penitents Sainte-Croix, chapel of Red Penitents, chapel of Grey Penitents and many rural chapels.

Finally Sospel is a site where many films have been shot...

The Saint-Hospice Chapel and its imposing bronze Madonna