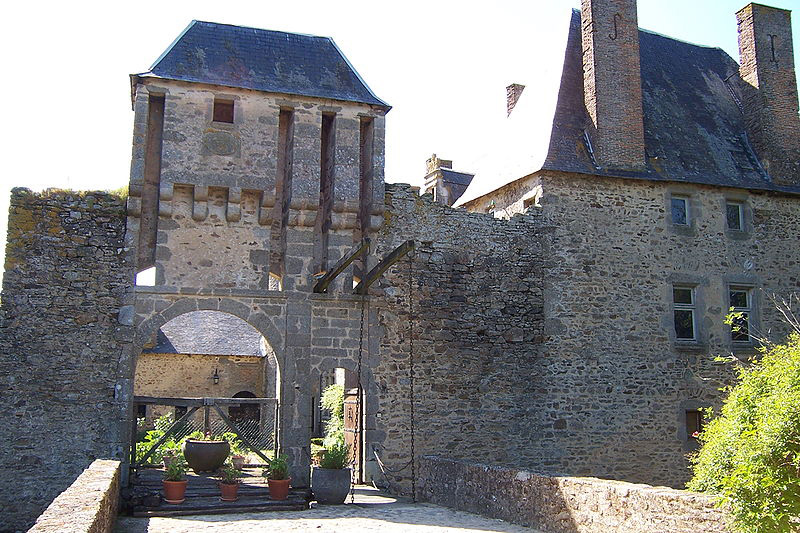 info_outline
You are here: Home / Regions / Nouvelle Aquitaine / 79-Deux-Sèvres / The Château de la Guyonnière and its gardens, back to the Middle Ages...

La Guyonnière, land of High Justice, built in the 14th century, is a typical medieval built and landscaped ensemble, composed of two islands set in a marsh from which several springs feed the ditches and give birth to a stream.

The fortress, flanked by four towers and a fortified gate with a double drawbridge, has kept all its elements (dwelling, staircase tower, stables, attic, ovens, dovecote...) despite some alterations in the 15th and 16th centuries.

The castle consists of a quadrilateral surrounded by a moat. The northern facade includes the lord's dwelling, the western facade is made up of a long building that housed the outbuildings, while the other two facades are made up of surrounding walls pierced with loopholes.

Access to the courtyard is via a two-arched bridge on which the end of a drawbridge once rested. The entrance consists of a semicircular porch, flanked by a postern and topped by the housing for the arms of the drawbridge. A defensive bretèche crowns the whole. The corners of the enclosure are flanked by four towers, the fourth corner tower being covered by a hemispherical vault on which rises a dovecote of 800 limestone shields.

On the façade opposite the main entrance there is another postern, which was once defended by a drawbridge. The towers and the enclosure have preserved, with their large number of loopholes, their defense system which gives the whole a very medieval character.

A garden in the medieval spirit has been recreated on the original site by the landscape designer Alain Richert. An island is accessed by a drawbridge.

The gardens are surrounded by a deep moat and consist of nine medieval-inspired squares where flowers, vegetables, medicinal and aromatic plants, fruits, roses, shrubs and fruit trees are planted.

A bees' clos with its 4 beehives redone in the old way according to an illumination of the XVth century, and its melliferous plants. A clos des fêtes or paradise with a pond, a bench covered with woodruff, violet and wild thyme around a very old pear tree, and a planted stage shaded by old trees supporting rosebushes, intended to welcome musicians, actors or other artists coming to propose concerts, poetry, mimes, tales, throughout the beautiful days and evenings from May to September.

These clos are connected by two wooden arbors twisted by fire, covered with vines and rosebushes.