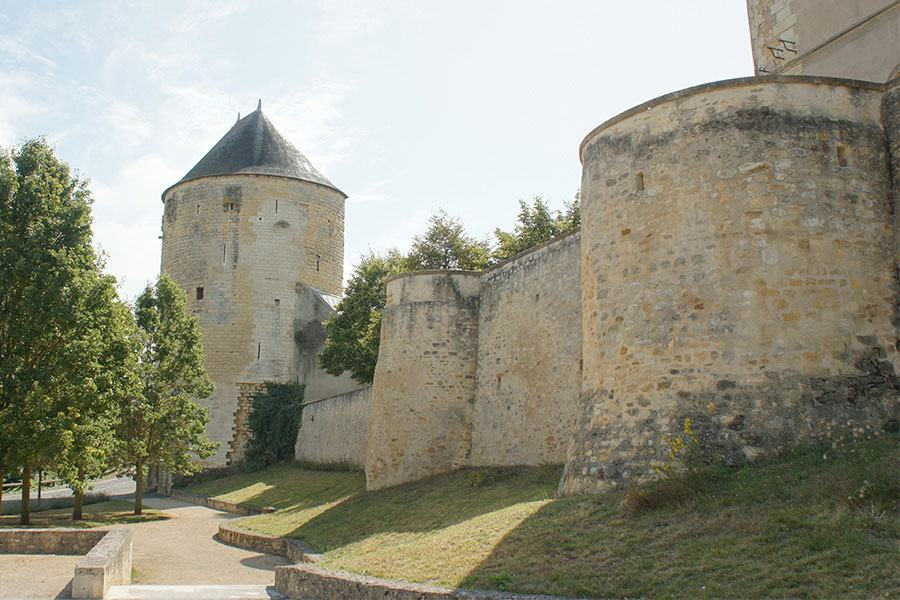 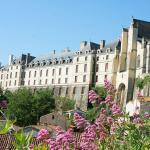 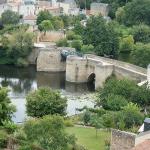 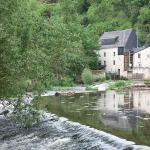 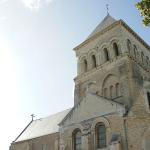 Thouars, city of Art and History

Since 2001, Thouars is labeled "City of Art and History". It must be said that the city does not lack assets in these fields and in particular as regards the heritage and the quality of the animations proposed by professional guides.

Romanesque churches, private mansions, the castle of the Dukes of la Trémoïlle, symbol of the city, numerous typical streets, half-timbered houses... Thouars, a city made of slate and tufa, is well worth a visit.

Starting with the Pont des Chouans, built in the 13th century, then fortified in the 15th century, today the last preserved medieval bridge that allows access to the city of Thouars. Its current name is linked to the Vendée wars.

From this bridge the visitor can enjoy an impressive view.

During your stay in Thouars, don't forget to visit the church of Saint-Médard, for a long time the most famous and most visited monument of the city. This building is systematically quoted when one evokes the Romanesque art in Poitou.

The Saint-Laon Abbey whose history cannot leave one indifferent.

In 1021, a lord of the court of the viscount of Thouars, who had in deposit a relic of Saint Lô (Laon), bishop of Coutances in the 5th century, wished to honor this saint by founding a community of four canons on a site on the outskirts of Thouars. The first sanctuary was soon too small because the miracles performed through the relics of the saint attracted many pilgrims and donations poured in. A church was therefore built. After an eventful life, between 1995 and 1997, important discoveries were made that motivated the work: the discovery of the vault and the remains of the young princess Marguerite of Scotland, dauphin of France, wife of the future king Louis XI, the discovery under the whitewash of the remains of wall paintings in the international Gothic style of great quality that testify to the consideration that surrounded a king's daughter destined to be queen of France.

The Chapel of Our Lady of the Castle, also known as the Collegiate Church of Our Lady Chapel, is attached to the castle of the Dukes of la Trémoïlle. It was built by Louis II de La Trémoïlle and Gabrielle de Bourbon.

Dating from the beginning of the XVIth century, it has a magnificent loggia of Italian Renaissance style. The collegiate church surmounts a lower chapel, built at the same time, which initially housed the parish of Notre-Dame.

Entirely vaulted, this chapel now houses the remains of the descendants of the Dukes of la Trémoïlle. Its facades combine flamboyant Gothic and Renaissance styles.

Built for the congregation of the Canons Regular of Saint Augustine, abandoned during the Revolution, this former abbey has been home to the Town Hall since the mid-19th century.

Another interesting monument, the Prince of Wales Tower built at the end of the 12th century, is part of the fortifications that surrounded the city at that time. It was also used as a gateway, as housing for the garrison and as a grain store. From the 17th century, it became a prison where the false salt smugglers were locked up. In 1994, the contemporary artists Ange Leccia and Jacques Vieille created two works of art on the theme of imprisonment, in relation to the tower's prison past.

Also worth seeing, the Eiffel Viaduct which spans the Thouet between Thouars and Sainte Radegonde, is 200m long, the Crevant Mill which produced flour between 1840 and 1989. It is a key element of the local industrial heritage and contains a mechanism dating from 1903. Without forgetting the Tour Porte au Prévot, built in the 12th century, which was the main entrance of the city to the north and in case of war, its best defense and the Hotel Tyndo, an architectural masterpiece from the end of the 15th century, which was the residence of Louis Tyndo, seneschal of the Vicomté and friend of Louis XV, King of France.

Finally, we cannot forget the Musée Henri Barré  which exhibits a beautiful collection of French and foreign earthenware as well as elements of local history and that of the Dukes of la Trémouille who marked the life of Thouars. To complete the visit of Thouars, you should go to the Art Center la Chapelle Jeanne d'Arc and the Geological Interpretation Center of Thouarsais.

Tourist Office of the Thouarsais country