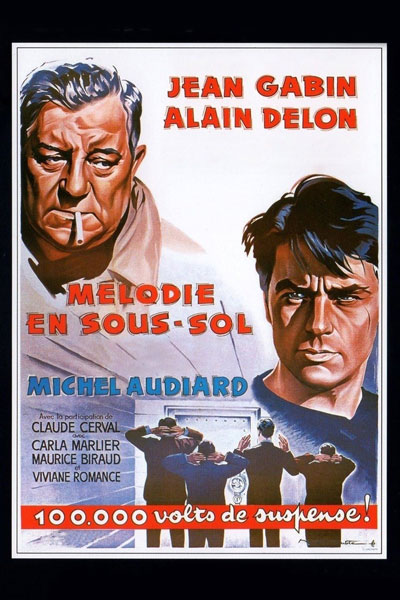 Mélodie en sous-sol is a French-Italian detective film directed by Henri Verneuil in 1963.

A film adaptation of the novel "The Big Grab" by John Trinian, it features Jean Gabin and Alain Delon in the lead roles.

It is the story of an old crook recently released from prison - Gabin - who teams up with a young gangster - Delon - to rob a casino in Cannes.

Released in cinemas at the beginning of 1963 in France, " Mélodie en sous-sol " was well received by critics1 and met with great public success with 3.5 million admissions in cinemas.

Small anecdotes about the shooting

After a start of shooting in the Paris region, the rest of the film is shot in Nice and Cannes, in the Alpes-Maritimes. The residences where Francis stayed during the time of the robbery are located on Boulevard de la Croisette, while the Palm Beach, the casino where the robbery took place, is located on Place Franklin-Roosevelt.

During the shooting, tensions between Delon and Verneuil were so frequent that the assistant director Claude Pinoteau sometimes had to act as an intermediary.

Similarly, Gabin reproached Audiard for having reduced the importance of his character.

On the other hand, a solid friendship was born between the two star actors, and this is the first film in which they play each other.

Alain Delon had boundless admiration for Jean Gabin, for whom he felt an almost subsidiary affection.

At the time the film was being made, for the part shot in Cannes, Delon asked to be notified of the arrival of Gabin's production car, to greet him as soon as he entered the studio.

The relationship between the two actors, who competed with funny inventions, was not always free of tension, especially since the lines written by Audiard were sometimes "cowardly".