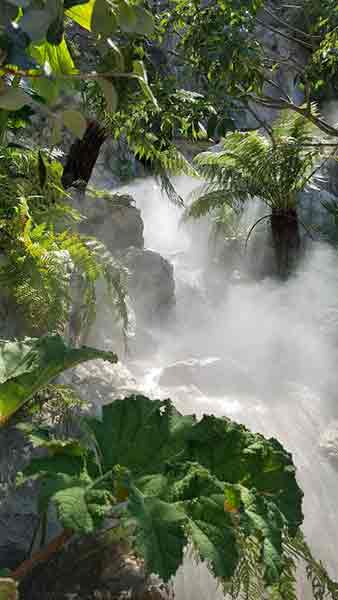 info_outline
You are here: Home / Regions / Provence Alpes Côtes d'Azur / 06-Alpes-Maritimes / The Exotic Garden of Èze, a ballad in the botany of the world

The Exotic Garden of Èze, a ballad in the botany of the world

Built on the site of an ancient medieval fortress, 429 meters above the Mediterranean, the Exotic Garden of Eze is articulated, since July 2014, around two large areas with plants from countries very different by their climate.

"The exotic garden of Eze is articulated, since July 2014, around two large areas with plants originating from countries very different by their climate.

The southern part, older, overlooking the Mediterranean, houses dozens of species of succulents, xerophytes from the main continents. These plants are native, for the most part, to the desert regions of our planet: North America, Mexico, South Africa. Even if some of them have been part of the Riviera landscape for more than a hundred years, this collection allows visitors to familiarize themselves with this type of plant, which often remains enigmatic in their eyes. Enameled lava tables present their specificities. Visitors can learn to distinguish an agave from an aloe, a cactus from a succulent euphorbia.

In contrast to this hot and dry area, the northern slope is much shadier and wetter. The idea of creating a complementary arrangement to the exotic garden itself was therefore a natural one, with typically Mediterranean plants such as myrtles, rockroses, arbutus trees and certain euphorbias joining others that were already well developed. The native plants have therefore been complemented by "exotic" species such as tree ferns from New Zealand, agapanthus from South Africa and hostas from China. In order to reinforce the impression of freshness and to take advantage of the natural geography of the place, it was decided to arrange the caves by installing, for one, a stalactite from which a thin stream of water flows, for the other, a small waterfall whose sound can be heard from the church square below and calls visitors to join this oasis after the trying climb of the village in the middle of summer.

It has received the special regional prize for flowering and the label "remarkable garden".

The panorama is one of the most exceptional of the Riviera. The view extends to the Esterel mountains and the Gulf of Saint-Tropez.