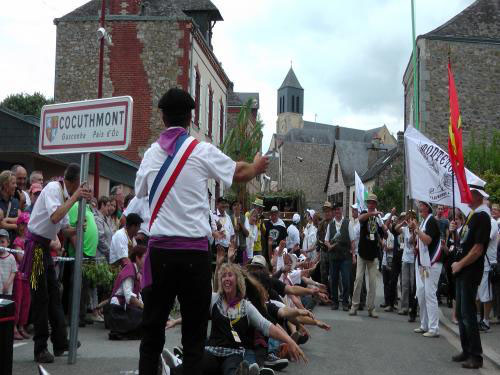 Cocumont is one of those villages with burlesque names that France has the secret of.

It is also part of the "Groupement des communes aux noms Burlesques".

Cocumont would come from the very old Greek root "kuk" which means "hill, rounded mountain" typical example of tautology that we find in Montcuq (46), Couquèques (33), and Cuqueron (64).

The most plausible origin would come from the Latin "cox" meaning oak and could indicate the top of a hill originally covered with oaks.

The more bucolic one would come from the Gascon "coucut", the "cuckoo" and would designate the hill where the cuckoo sings.

Until 2004, the rest area of the A62 motorway located in the commune of Cocumont was called "Aire du Chant du Coucou".

The cradle of the village is the old Romanesque church founded in the 11th century by the Benedictine monks of the Abbey of Conques, who installed a vineyard on the site, at the origin of the long wine tradition of Cocumont.

But older building elements (8th and 9th century limestone rubble) have been found on the site of the old church, which suggests that the human settlement could be much older.

Perhaps the site was already occupied in the 3rd or 4th century A.D. when the culture of the vine, in full expansion, colonized the valley of the Garonne.

In addition to its famous vineyard, Cocumont is also known for its recipe, "la sauce aux boules".

The Castle of Duras