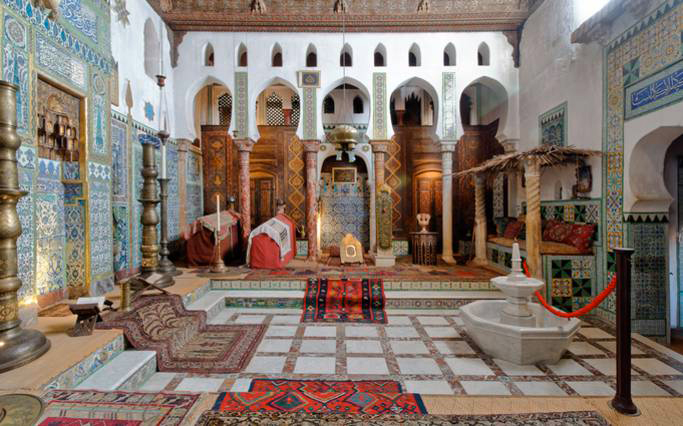 On 30 September 2012, in Rochefort, a queue lengthened for more than a hundred metres in the Pierre Loti street in Rochefort. It must be said that this date was the last day of the visit of the house before work of Julien Viaud better known as a writer under the name of Pierre Loti.

Today this two-storey building dating from the 17th century has not yet reopened as the work is so complex.

The House of Pierre Loti is certainly the most exotic and the most original house of the 19th century. A naval officer and writer, Pierre Loti brought back from his many travels around the world many objects, drapes, decorations and souvenirs which gradually served him to transform his native house.

Thus the Renaissance hall, the Gothic hall, the mosque, the Turkish lounge and the Arabic room, the Chinese room, the Japanese pagoda, the mummy room... are born, transporting the visitor to the magical and exotic worlds of the Middle Ages and the East, revisited through the imagination of the writer.

Pierre loti had also laid out a rather surprising garden. The first garden which cradled his childhood was populated by a luxuriant flora, cats but also turtles...

Then, after extension, the garden became partly "cloister" and entrance to the mysterious Chinese room. It houses a family stele borrowed from the Rochefort cemetery, a gargoyle and above all a precious basin made for him by his brother, Gustave.

This garden was classified as a historical monument in 1990.

If the house is closed for several years of restoration work the town of Rochefort offers a 3D virtual tour of this surprising house and an exhibition at the Hèbre de Saint-Clément, Museum of Art and History.

With " Loti, le voyage rêvé ", you will be able to discover the secret gardens of the young Pierre loti, his " Little museum ", his drawings, his donkey skin theatre and follow in chronological order his intimacy and his life.
A fascinating journey rich in objects by naval officer Pierre Loti.

Another remarkable house that also belonged to Pierre Loti, the "Bakhar Etchea" house is worth the detour... It is located in Hendaye in the Atlantic Pyrenees.

label Remarkable buildings Amazing... isn't it? Made in Grand Sud