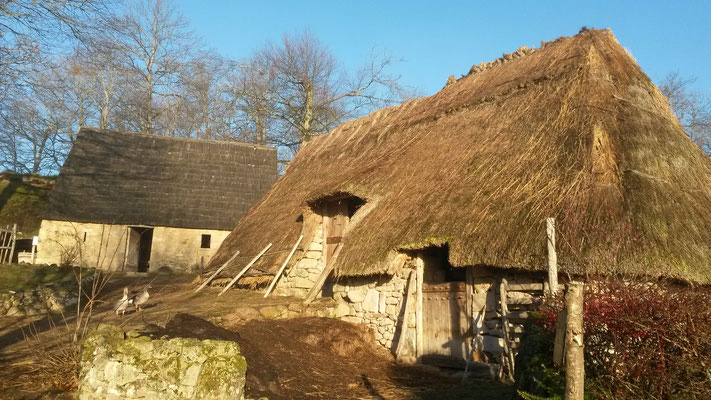 info_outline
You are here: Home / Regions / Nouvelle Aquitaine / 19-Corrèze / The Farms of the Middle Ages as in the good old days

An open-air museum with views of the Auvergne volcanoes, the Fermes du Moyen-Âge faithfully recreates, on 12 hectares, a group of thatched cottages with stone walls and thatched roofs in their garden and orchard environment. This site is also a conservatory of plants characteristic of medieval sites and the breeding of domestic animals that is practiced there has been the subject of archaeological and zoological studies.

It is served by paths lined with low walls.

Since 2005, Pierre, an enthusiast of old stones, accompanied by his family, has been building stone by stone a village of the late Middle Ages. After 25 years of ethnographic, archaeological and historical research and thanks to the study of hundreds of local notarial deeds Pierre has embarked on this adventure which today attracts thousands of visitors who appreciate the authenticity of this village and its soul.

To see in particular the Water Mill, a reconstitution of a mill from the end of the 15th century, the Lantern of the Dead, which in the Middle Ages was lit in the cemetery on the night of the day of a parishioner's death until the day of his burial.

It was also lit on All Saints' Day.

The light of the lantern was a reminder of Christ's resurrection, it testified to the "lumen christi" that was sung at Easter.

You can also see farms with thatched or slate roofs and visit the house of the weaver or the masons, the wash house, the chapel... an authentic medieval village inhabited by its owner and his animals.

Finally, a medieval garden rich in 350 medicinal, aromatic, vegetable, technical or dyeing plants, is an exceptional conservatory because most of the cultivated plants were collected on the medieval sites of the region, requiring more than 60 years of research. A specialized Middle Ages bookshop and a store complete the site.

The Farms of the Middle Ages

Saint-Robert, a medieval village with many treasures

The castle of Turenne, major place of the History of France