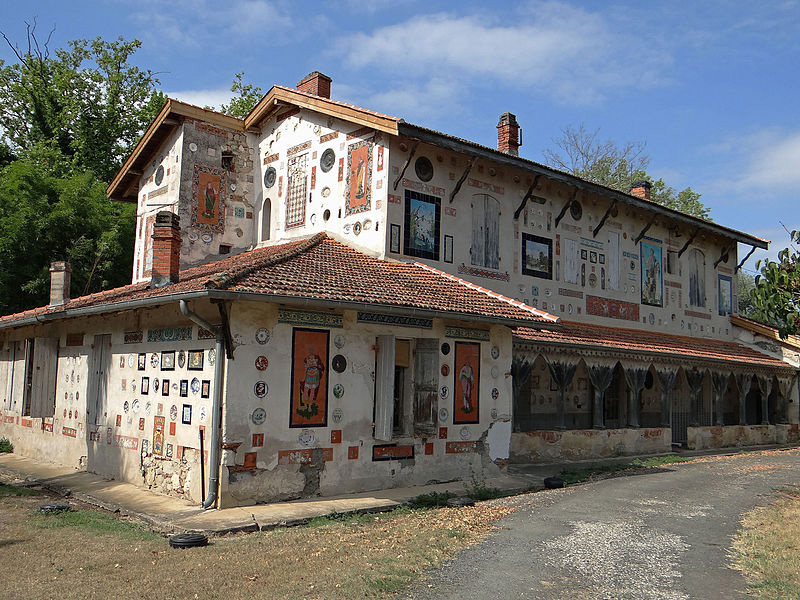 La Maison des Assiettes, an old castle occupied by a royal nursery of white mulberry and plum plants was built on the Domaine de Senelles.
The estate was bought in the middle of the 19th century by Désiré de Brondeau and around 1888 his son, Léon de Brondeau, an art collector who was also interested in politics and agriculture, modified the house that was to become his home.

According to the Echo de Gascogne in 1892, "For more than twenty-five years, he had also been collecting paintings, bronzes and other works of art [...]. In 1880, he found that he had too many enamels, too many dishes, too many plates in his interior. It was then that he came up with the idea of applying them outside Senelles' house [...].

Earthenware, old and modern porcelain, dishes, panels were inlaid in very large quantities on the four exterior facades of this house, which is today one of the artistic curiosities of Bias.

The ceramics come from France, Limoges, Martres-Tolosane, Nevers, Quimper, Rouen but also from all over the world, from England, Sweden, Japan or China. One of the masterpieces is the large panel by the famous ceramist Théodore Deck, painted by Eugène Gluck, representing "Urania", the muse of astronomy.

The other particularity of Senelles is the decoration of the interior staircase. Léon de Brondeau glued on these walls caricatures and drawings from magazines of the end of the 19th century.

The Maison aux Assiettes has deteriorated over time and restoration work has become necessary.

The building was registered as a historical monument on 26 November 2012.

Xavier Llopis, president of the association "Brondeau de Senelles" and a town councillor, is at the head of a team of volunteers passionate about art and history, who have been devoting themselves for years to the restoration of this amazing little castle.