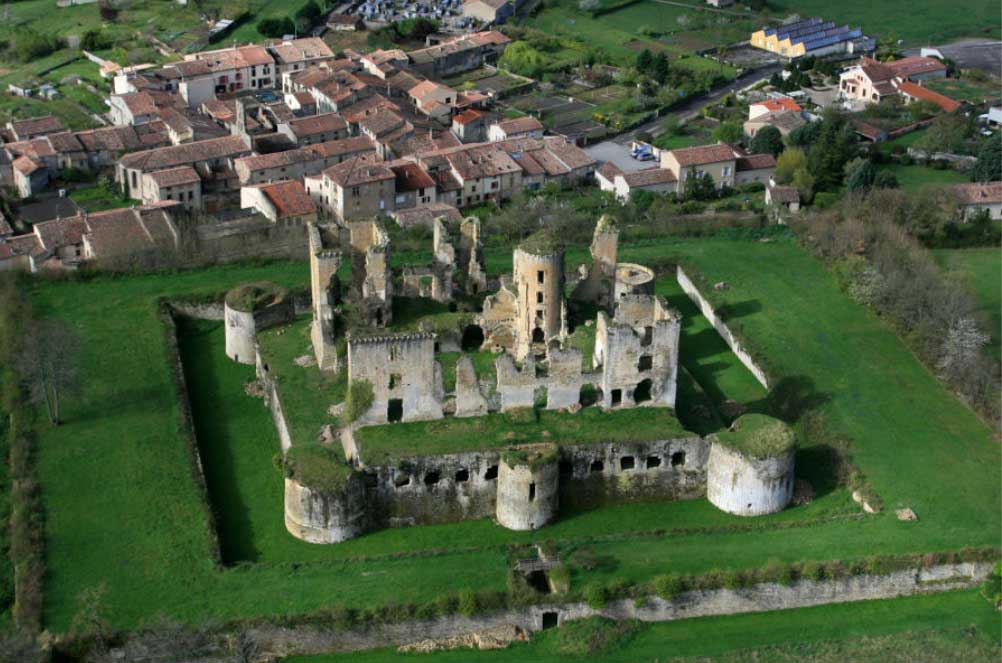 A little history...
Situated in the commune of the same name, in Ariège, near Mirepoix, the castle of Lagarde was formerly called "La garde de Mirepoix". Built from the 11th century, the king of Aragon, Ramire I of Navarre first made it a watchtower in the north of his kingdom, then the Levis family, lords of Ile-de-France, winners of the Albigensian crusade, built a castle in the 14th century on a hill overlooking the valley of the Hers-Vif.
The fortified gate tower, the base of the square towers, the guards' room, the gatekeeper's dwelling and the curtain walls remain from this period, while a drawbridge and its portcullis defended the access.
"During the Renaissance, the fortified defensive stronghold became a prestigious residence, under the authority of Jean V de Lévis, a leading figure with Louis XII and François I, ambassador and man of culture in contact with Italy and the castles of the Loire Valley. He modified the castle towards the interior of the courtyard, had windows pierced, raised the square towers, built a chapel and a gallery and, above all, erected the tower of the staircase, a masterpiece of the time.
In the 17th century, Louise de Roquelaure, wife then widow of Alexandre de Lévis, launched major works to further transform the Château de Lagarde. She had the top of the bastions modified, added a floor, erected colossal statues on the bastions and the stair tower, created the large esplanade surrounded by balusters with handrails, and opened windows with balconies. The now useless drawbridge is replaced by a stone bridge and a driveway leads down to the village. Louise de Roquelaure also launched a project for a French garden, with remarkable trees, ponds, flower beds and statues.
Over the centuries, this castle has been the object of many


The rebirth
Over the centuries, the castle has been the object of numerous alterations, becoming a pleasure palace in the 17th century.
The castle gradually fell into disrepair and ruins after the Revolution, which symbolically transformed it into a stone quarry.
From the beginning of the 20th century, only vestiges remained of it, testifying to its past splendour and grandeur.
From 1990, volunteers tried to restore what was one of the most beautiful French castles of the seventeenth century.
Several associations succeeded one another with the ambition of restoring the site: the new owner Danielle Gillet opened the site to visits, bringing this monument and its remains to a historic turning point.
In 2006, the association Comité de Défense du Château de Lagarde set up a medieval vegetable garden and opened the site to visitors.
In 2012, Danielle Gillet will donate the castle which will be managed from 2015 by the very young association "Per le Castel" (For the Castle) with the aim of continuing the restoration.

Dream and magic of railways in the Ariège region