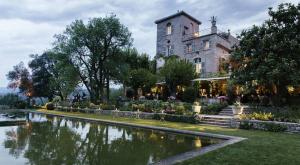 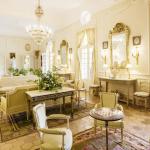 The castle of La Colle Noire is located at the entrance of the Pays de Fayence, on the border between the Alpes-Maritimes and the Var. It is surrounded by a park which shelters the Sainte-Anne Chapel of the XIXth century, entirely reworked by Christian Dior from 1950.

A little history...
In the 19th century, a notable man became the owner of a huge estate of more than 100 hectares where perfume roses, vines and jasmine were cultivated. By extension, the name of the whole area was changed to "La Colle Noire".
The castle was built on the property.
In the 20th century the property changed hands before being abandoned.
In 1950, the estate was bought by Christian Dior who undertook its restoration but his death in 1957 did not allow him to see his work completed.
Today, the Château is a place for receptions and vacations. Weddings are organized there in an exceptional setting.
In 1999, the castle became an ephemeral studio where the English group "Oasis" recorded part of their 4th album "Standing on the shoulder of giants".

After an intense restoration conducted from 2015, La Colle Noire was inaugurated by Parfums Christian Dior on May 9, 2016 in the presence of Charlize Theron.

Not to mention the garden...

The Château de La Colle Noire is first and foremost a "garden house", where Christian Dior expresses all his passion for flowers with excessiveness. From the day he acquired this castle and the surrounding farmland, he has never stopped planting fragrant and verdant acres of perfume flowers, May roses and Grasse jasmine, but also entire fields of olive trees and fruit trees.

From Paris, he would inquire about the flowering, participate in the harvest, the making of the olive oil, and multiply his visits to monitor the development of his domain.

A thousand feet of May roses, vines, olive trees, almond trees - trees so dear to Christian Dior - have been replanted in the garden of the Château. His favorite flowers are there: lily of the valley and agapanthus, tulips and violets, and above all the Rose de Grasse, which is at the heart of Dior perfumes.

The Provençal character of the garden, as intended by Christian Dior, is now back.