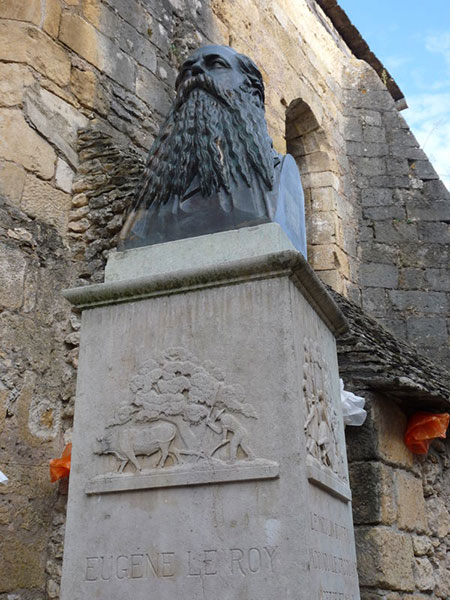 Located in the former Saint-Jean L'Evangéliste Hospital, the Eugène Le Roy Museum offers visitors the opportunity to discover the writer's study, faithfully reconstructed.
Eugène Le Roy, poet and regionalist writer from the Périgord, became known for many novels, especially "Jacquou le Croquant".
The reconstituted cabinet offers all the furniture, drawings, family papers, books from his library...
Mannequins dressed according to Eugène Le Roy's descriptions and on the advice of Mrs. Valprémy, a great specialist of the Périgord, represent the main characters of his work.

The Eugene Leroy Museum has unfortunately been closed to the public.

Eugène Le Roy, poet and regionalist writer from the Périgord, has made a name for himself with numerous novels, especially "Jacquou le Croquant".

Coming from a modest family, he stopped his studies at the age of 15 to join the army in 1855. Broken of his brigadier's rank for indiscipline, he resigned after five years.
Eugène Le Roy, who had received a direct contribution, became an assistant tax collector in Périgueux.

On June 14, 1877, to the great indignation of the good society, the future writer civilly married his companion Marie Peyronnet, whose three-year-old son he already had when he was born in 1874.

Eugène Le Roy wrote in local newspapers, "Le Réveil de la Dordogne" in particular, republican, secular or anticlerical articles. "Le moulin du Frau", his first work of fiction (1890) is a real lesson in radicalism under the Third Republic.
From 1891 to 1901, Eugène Le Roy wrote a voluminous manuscript of 1086 pages entitled "Études critiques sur le christianisme". In 1894, he began writing "Mademoiselle de la Ralphie" which he completed in 1902.
In 1899 he published "Jacquou le croquant", which was to be one of his most important works.
A few years before his death, in 1904, he refused the Legion of Honour.

The Château de Montfort with its astonishing history