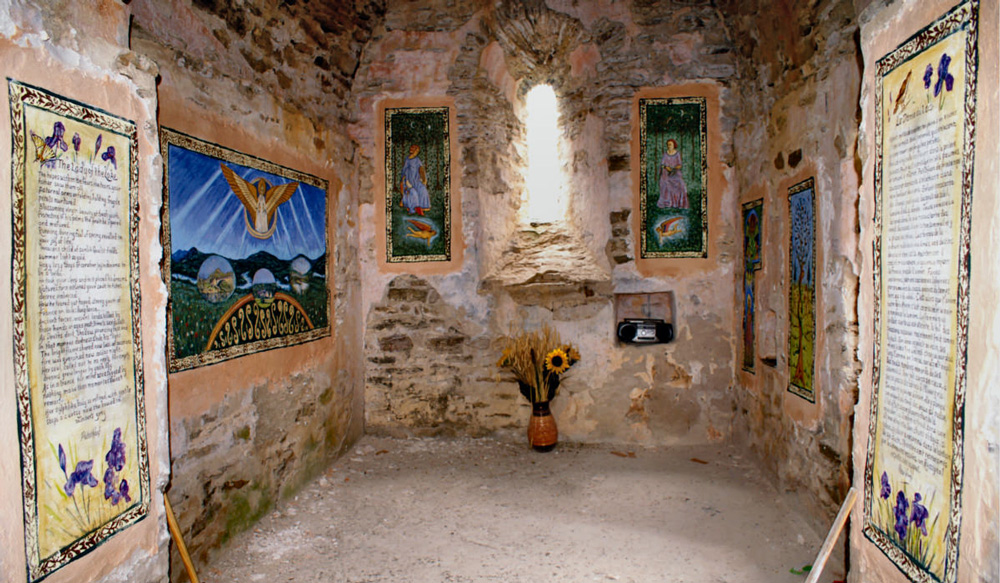 info_outline
You are here: Home / Regions / Occitany / 12-Aveyron / The legend of the Del Dol chapel

The lord of Estaing, very close to the lord of Vallon, widower and father of a young son, had a daughter.
Forced to go to war, the lord of Vallon entrusted his son and his servant to his friend the lord of Estaing.
The two children played and grew up together and then fell in love.
However, the lord of Estaing planned to marry his daughter to a powerful lord of the neighborhood, the baron of Thénières, a hard and violent man.
The young girl, on the contrary, felt only aversion for the one that her father intended for her.
The baron of Thénières, understanding that the heart of the young girl was already taken, incited the lord of Estaing to send back, at his place, in Vallon, the young companion of his daughter.
The young people, while separating, swore to see each other again.
On the appointed day, a light placed at the top of the great tower would indicate that there was no danger.
The indiscretion of a maid put the baron of Thénières in the know, who paid six rascals a lot of money, and had the main arch of the bridge that linked Estaing to the left bank knocked down on a very dark night.
In the night, the young man did not see the abyss, which opened in the place of the bridge and drowned in the abyss.
His servant did not see him return and went the next day to meet him. Seeing the broken bridge, he understood that he had probably fallen and alerted the lord of Estaing and the whole population.
They searched along the river for the body of the young man, who was seen opposite the road to Montaigut.
With a small boat, which is called in the country a nego-fouol, they succeeded in bringing back the body.
During this time, a brief investigation revealed the name of the culprit, the baron de Thénières.
At the request of the young girl, the lord of Estaing had the young man buried in the place where he had been taken out of the Lot, and he had a chapel built over the grave, and next to it a dwelling for a hermit whose mission would be to pray for the deceased and for the two families of Estaing and Vallon. This chapel has since been called La Capelo del Douol, the chapel of mourning.
The girl soon followed her companion to the grave.
On the anniversary of the death of the two lovers," say the fishermen of Estaing, "a light cloud similar to a fog rises above the great tower of the castle and gradually takes the form of a woman in long white clothes, with her hands raised to the sky, and three times you hear the very distinct cry: Douol! Douol!... Douol!... and everything disappears. (according to Pons d'Hauterive).

A little history...
For a long time, the masses of Novena were celebrated there.
The chapel was dedicated to Saint Laurent, deacon and martyr.
On June 12, 1731, after a great ceremony, the relics that were deposited were brought back to the Church of Nayrac.
The chapel was sold to the Bousquet de Carmarans family and passed through several owners: Mr. Galtier, Notary, then to E.D.F. who gave it to the commune of Nayrac.
The cult is no longer celebrated there.
Today, thanks to a group of passionate people and a few volunteers, this chapel is coming back to life.
Francine Samper, a dynamic Estagnole, has cleaned and embellished the surroundings of the chapel.
It is enough to go down a few steps, more or less equal, but which make the charm of an authentic staircase, and there, once the door pushed, we enter inside this place full of history and legend.
It was here that one day Peter Wood, an English artist and new owner of Le Paradou, discovered this place and this chapel.
He wanted to contribute his artistic talents to the renovation of this building by creating paintings related to the legend and the Bible.
On plaster surfaces painted with white emulsion paint, Peter Wood created several paintings representing the young lord and lady: "the seven deadly sins", "Adam and Eve" or even Saint Christopher, Saint Francis of Assisi, ...
These frescoes made with acrylic paint give life to the chapel.
To complete his work, the artist also made candlesticks in acacia and oak from the region as well as the cross, all placed on the altar of the chapel.
Since September 20, 2008, the altar has a new fabric designed and embroidered by Shuna GILES, an artist from New Zealand, inspired to create this work by Peter WOOD.

Peter WOOD, gives free tours of this beautiful chapel by appointment.
A key is also available at the tourist office in Estaing.

The Joseph Vaylet Museum, Museum of Popular Arts and Traditions

André Debru, the artist of iron and recovery