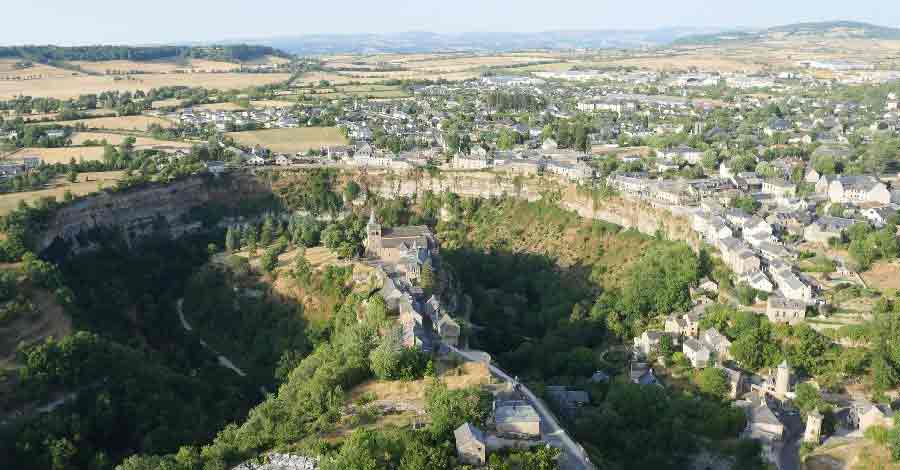 info_outline
You are here: Home / Regions / Occitany / 12-Aveyron / The hole of Bozouls, wonder of the Aveyron

The hole of Bozouls, wonder of the Aveyron

Once listed among the seven wonders of Rouergue, the "Trou de Bozouls" is a natural cirque, a horseshoe-shaped canyon, carved out of the secondary limestone of the Causse Comtal. At the bottom of this hole, flows, sometimes impetuous, sometimes calm, a modest torrent, the Dourdou.
To appreciate this immense precipice with almost vertical walls, forming a circus of nearly 400 m in diameter and nearly 100 m in depth, nothing is better than the terrace, place de la mairie.
This grandiose site was dug, over the years, by the Dourdou.
For thousands of years, this torrent has "worked" this gigantic trench, whose sides are hollowed out with cracks and cavities from which resurgences flow in winter and during heavy rains.
The most famous one is, on the right bank, the "source des Fées".
In addition to the erosion, which is very weak nowadays, the rock is undermined by strong frosts in the winter. The canyon continues to evolve.
When the Dourdou rolls its muddy waters, two impressive waterfalls cut the torrent, one of them falling into the Gourg d'Enfer, an abyss reputed to be unfathomable, and overhung by a high cliff.
It is from the top of this cliff that about a century ago, a beggar, tired of life, walked backwards to the edge of the precipice, called since "the Beggar's Leap", and fell into the void.
Enthralled by this site, Henry's, the world champion tightrope walker, made it the scene of his most brilliant exploits, first in 1980, then throughout the summer of 1982 and for the last time in 1995.

The hole of Bozouls is also known for its legend.