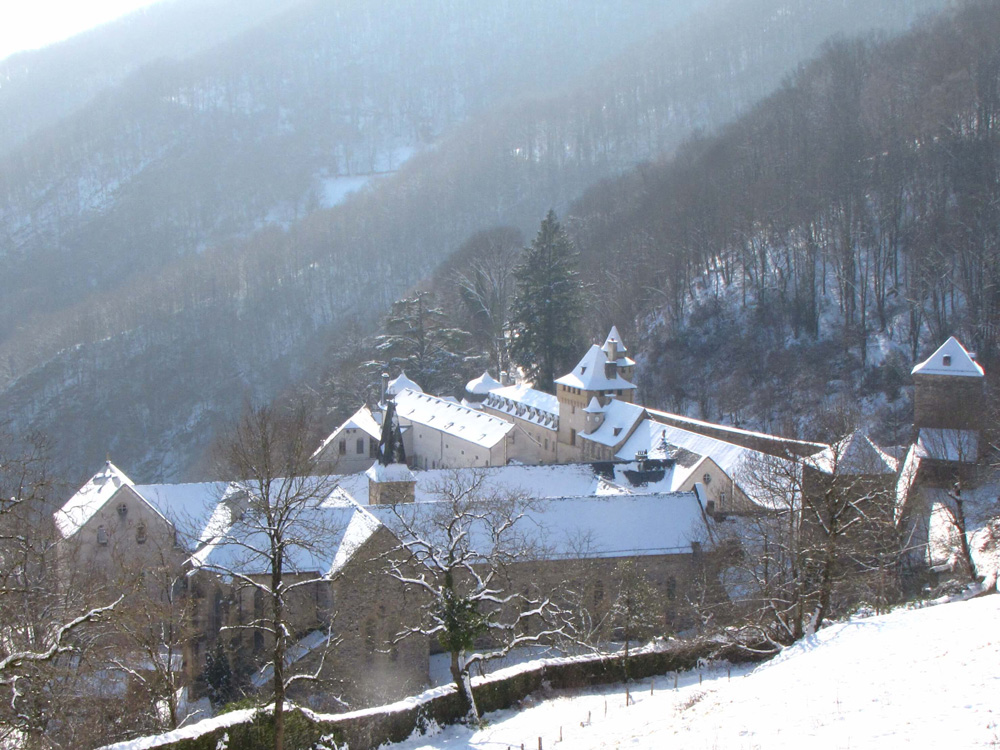 info_outline
You are here: Home / Regions / Occitany / 12-Aveyron / An artisanal chocolate factory since 1878... in an abbey!

An artisanal chocolate factory since 1878... in an abbey!

Welcome to Notre-Dame de Bonneval Abbey! Founded in 1143, the abbey has endured throughout history and continues to house a religious community that has been working in its chocolate factory since 1878. It is one of the oldest in France!

It all began in 1143 with Guillaume de Calmont d'Olt, then bishop of Cahors, who owned a family castle overlooking the northern Aveyron. He had seven Cistercian monks come to his lands, and they quickly made a name for themselves and attracted many vocations! It was then necessary to move quickly to a quieter place, isolated in a valley. This is where Bonneval comes from: the name comes from the Occitan word "Bona Val" which means "good valley"! This is how the wild valley in which the new community will settle is described... Today, it is still the case!

The monastery then reached its peak in the 12th and 13th centuries, both in terms of the number of monks and in terms of goods and possessions. Unfortunately, thereafter, Bonneval Abbey suffered major conflicts such as the Hundred Years War and the Wars of Religion...

The Revolution finished off this dynamic: the 13 remaining monks were expelled in 1791, and the abbey was sold as national property before becoming a stone quarry. A sad fate!

The rebirth in the 19th century!

In 1850, the local parish priest proposed to the Trappist monks to come and settle in Bonneval, but they refused, because the place was considered too wild and unsuitable for agriculture. It was finally in 1875 that the Bishop of Rodez succeeded in getting the Trappist nuns from Maubec, in Provence, to come to the area.

However, Bonneval Abbey was in ruins, the cloister no longer existed and the church was in the open! That's all there is to it. Fortunately, Dom Emmanuel, a monk from the abbey of Aiguebelle, came to give the sisters a hand in supervising the work. On July 19, 1877, the first stone was blessed and the work began.

It was in 1878 that Dom Emmanuel had a small chocolate factory set up in Bonneval. The success was almost immediate:

- 1884 : vermeil medal at the regional contest of Rodez

- 1895 : bronze medal at the Bordeaux competition

Then in 1927, a master chocolatier gave them all his secrets so that they could further refine their recipes... Enough to make everyone melt! Click here to discover the chocolates of Bonneval Abbey!

Today, the abbey of Bonneval counts twenty-one nuns! They are Trappistines (Cistercian nuns of the strict observance), and thus follow the rule of Saint Benedict "ora et labora" (pray and work). The first of the seven daily offices is at 4:30 am!

As for the work, it's grinding the cocoa beans, putting them in molds, packing the chocolate, etc...

Without forgetting of course the smooth running of the guesthouse and the abbey: cleaning, washing up, cooking, etc... they have no time to get bored!

A Virgin overlooking the valley...
If you walk around Bonneval Abbey, you may see a Virgin on the hill in front of the abbey... For the record, it was erected by the Mother Superior during the Second World War. Indeed, she had vowed to erect this statue if the community came out of the war without too much damage. Even today, this beautiful Virgin continues to watch over the "Good Valley", its inhabitants and all those who pass through!

The little luminous information to remember

In 1885, thanks to the energetic Dom Emmanuel, Bonneval Abbey became ultra-modern. Remember the hydraulic engine installed below the abbey: it will bring electricity to the sisters! At first glance, it doesn't look like much, but in fact it is truly revolutionary. At the time, the Place de la Concorde in Paris did not even have such modern lighting! Thanks to the nuns, the small neighboring town of Espalion became the third electrified town in France in 1888. Amazing, isn't it?