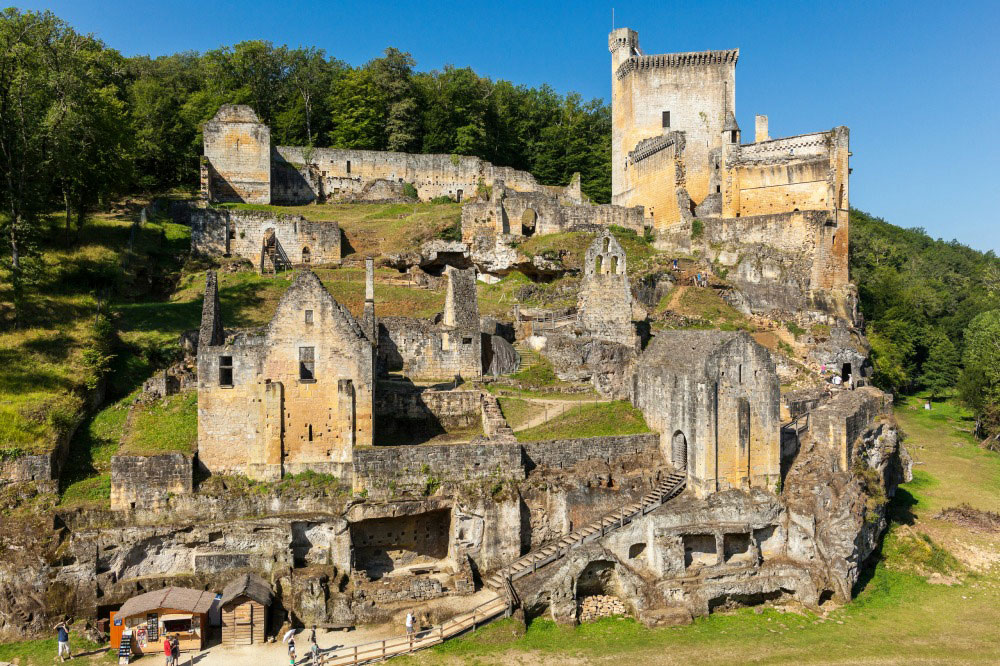 The Castle of Commarque resurrected

The castle of Commarque is the proof, that in the 13th century, one could be romantic.

The double enclosure and the enormous keep emerge from the forest.
At the foot of the castle remain only the ruins of the old village and its chapel.
For lovers of details a chessboard is engraved on one of the stone benches and for lovers of photos, a beautiful picture can be taken through one of the gothic windows from which one discovers the neighboring castle of Laussel.

Already between the 12th and 13th centuries, epic poets sang of the achievements of the knights of the 9th or 10th centuries and were interested in the family of Commarque, in Périgord, and recounted in several chansons de geste the exploits of its founder, Bovon, and his two sons, Girart and Guiëlins.

"Built in the 12th and 14th centuries, Commarque is probably the most complex medieval complex in the Périgord. It was in fact a "co-seigneury": the seigneurial families lived in the various towers of this fortified village. It is also the most curious castral ensemble of the southern Périgord with its complex defenses, its successive moats, its concentric ramparts and the vertiginous verticality of its keep, 80 meters high, in beautiful device ".

"At the beginning of the 12th century, Gerard de Commarque donated his property to the Knights Templar, the "Hospitalis de Comarco".

At that time, there was an agglomeration, a dungeon - this time made of stone - with a dwelling, a chapel and tower houses: it was the castrum of Commarque. The castle became a commandery which, after the tragic disappearance of the order, passed to the hospitallers of Saint John of Jerusalem.

The latter erected the enormous keep and then sold the place to the Baron de Beynac, who thus inherited the power of decision on the erection of the towers ".

In the 1500's, after a very eventful history, the castrum of Commarque began to be deserted by the resident families. This is the case of the younger branch of the Commarque family who left the original site to take up residence on the other side of the river, in the castle of Laussel. It is the beginning of a great 400-year sleep...

After having cleared the vegetation and the cones of scree that gradually uncovered the alleys, the stairs carved into the rock and the remains of sunken houses, Hubert de Commarque has stubbornly led, since 1962, with the help of the administration of Historical Monuments, consolidation and restoration work that allowed a large part of the exposed elevated walls to be saved, in particular thanks to the recovery of breaches and gaps in the castle itself, which was in great danger of collapse.

At the same time, with the help of American Foundations and the State, he led an ambitious program of excavations and archaeological research involving many disciplines, which continuously enriched knowledge about the life and organization of a Castrum throughout the Middle Ages.

From 1973 to 1993, the site served as a research, study and training ground for the Permanent Center for Environmental Initiation in the nearby village of Sireuil.

His efforts and tenacity were rewarded by the Grand Trophy for the most beautiful restoration, awarded by Propriétés Le Figaro, Le Figaro Magazine and the Fondation pour les Monuments Historiques, in partnership with La Demeure historique.

The site is now open to visitors, who can visit freely or be guided by an experienced professional guide.

During your visit you will discover :

- the Prehistoric Grotto of Commarque through a photo exhibition and a video film projected in the great hall of the keep.
- the troglodytic habitats arranged
- the medieval castrum and the Romanesque dungeon which dominates the Beune valley.

You will also be able to participate in workshops and animations related to the different periods of the site.

The Tattooed Man in his castle