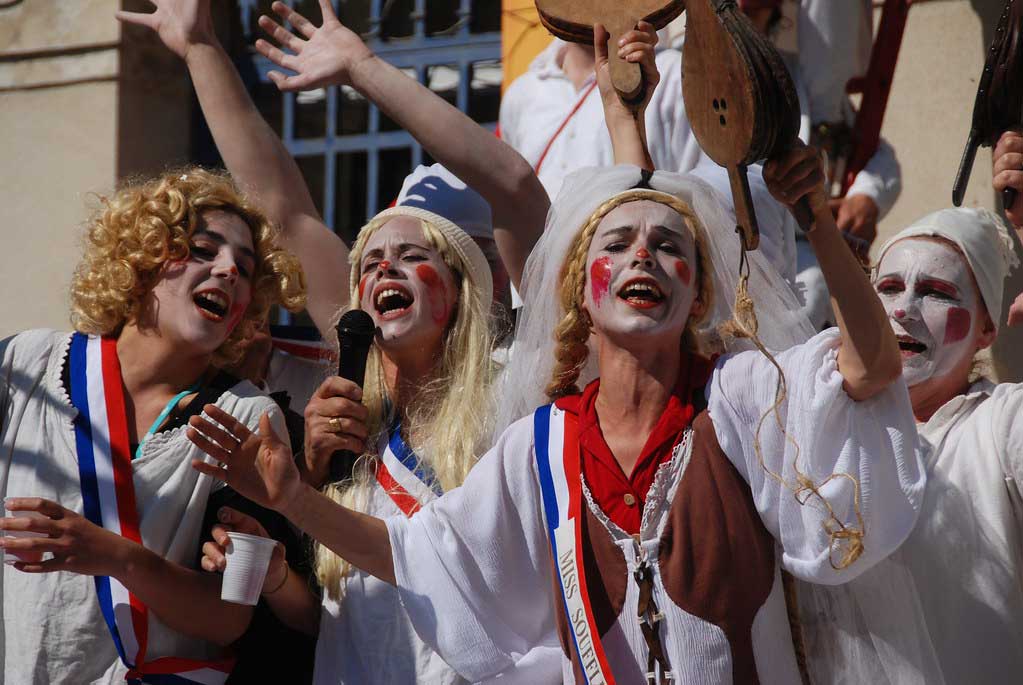 Going back to the Middle Ages, the tradition of "Soufflaculs" has only really survived today in Nontron in the Dordogne and Saint-Claude in the Jura.

Like any carnival, it is a farce during which the people dressed up in masks and disguises, and brocaded the rich and powerful, especially monks and priests...

At Nontron, we meet these traditionalists, dressed in white and with make-up, a bellows in their hand chasing away evil spirits.

According to Louis Le Cam "The Procession took place during the period preceding the Lenten youth, when feasting and a certain license in morals were allowed. Presumably the bellows were intended to exorcise the demons hiding under the skirts of the women of Nontron, the Nontronnaises having the reputation of being light and not very virtuous.

This tradition would then have fallen into disuse; it would have been exported to Mexico by a religious order, and given back in honor in the Jura and in Nontron, by the soldiers of the expeditionary force back in France, after the failure of the conquest of 1865. »

According to Mr. Thibaud, another explanation is plausible.

"This tradition would be a disrespectful parody of the exorcising zeal of the Fathers of the convent of Saint Sauveur. In order to drive the Spirit of Evil out of the corners where they suspected it was hiding, the "Good Fathers", dressed in white and provided with bellows, followed one another in procession, blowing vigorously in all the places which seemed to them likely to shelter the demons.

The tradition of the bellows, like the carnival, took place as Lent approached. During this feast (masquerade), the people disguised themselves in such a way as to mock the rich, the clergy and the powerful. Today the masquerade of the soufflaculs is the occasion for moments of madness and festivities in the town of Nontron. The wearing of the skirt is obligatory for the women by municipal decree and the cuckolded husbands (traditionally) wear nightgowns and cotton caps to blow (with a gusset) under the women's skirts. This gives rise to many overflows. A parade is organized to the sound of brass bands in the village and in the evening you can attend the handing over of the valiant sardine and the cremation of the chief soufflacul: Buffadou. »

The soufflaculs parade takes place today on the first weekend after Easter and attracts many curious people.

What do you want to do ?
New mail