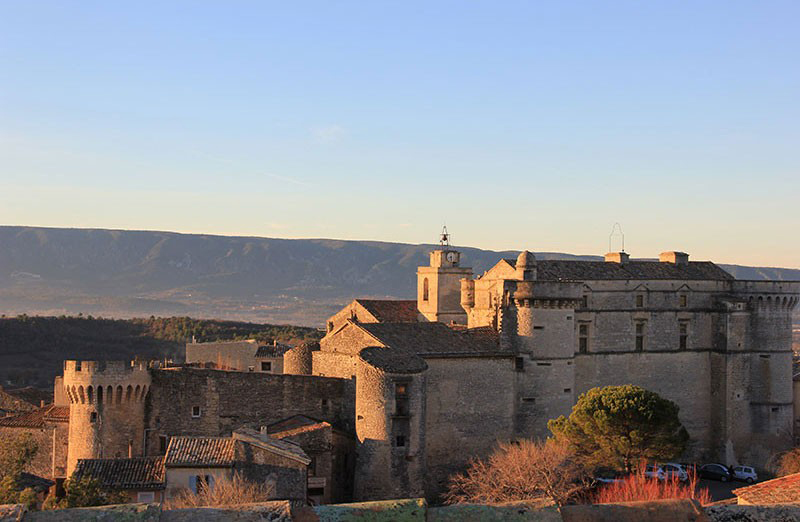 info_outline
You are here: Home / Regions / Provence Alpes Côtes d'Azur / 84-Vaucluse / Gordes, one of the most beautiful villages in France

Gordes, one of the most beautiful villages in France

The South to be seen is Saint-Tropez, the South not to be seen is Gordes.
François Mitterrand sheltered his secret love affair with Anne Pingeot there and Mazarine grew up there in the summer!
At the foot of the Alpilles, we have seen them there or we still see them: Michel Field, Alain Prost, Marc Chagall, Guillaume Durand, Josiane Balasko, Claude Perdriel, Michel Drucker, Pierre Bergé, Michel Lebb... and so many others like illustrious painters such as André Lhote, Marc Chagall, Jean Deyrolle, Victor Vasarely and Pol Mara, among others, who found inspiration here.

Gordes, the most beautiful village in France

Clinging at 340 metres above sea level to a rocky peak in the Monts de Vaucluse, Gordes dominates the plain and the Calavon Valley, offering a magnificent view of the famous Luberon mountain.

Gordes stands like a citadel, offering to the eye the witnesses of its past, a majestic protective castle, a massive church with defensive features, an enclosure of high buildings overlooking the precipice and narrow streets that allow to escape the assaults of the Mistral,

Here, cool cellars and discreet underground passages have been dug into the rock.

Its history, its architectural and patrimonial wealth, its breathtaking panoramas, so many invitations to discover this Provencal jewel.

The village developed from the 11th century around the fortified castle to become a real fortress protected by ramparts in the troubled times of the Middle Ages.

The history of Gordes is marked in the Renaissance by the powerful Provencal family Simiane d'Agoult in the person of Bertrand Rambaud de Simiane who, in the 16th century, remodelled and enlarged the castle.

In the village craft activities are developed: Silk spinning mills, tanneries, shoemaking, and wool weaving that provide work and allow many Gordians to improve a difficult daily life but in the 19th and early 20th century Gordes suffered successive earthquakes causing destruction, industrial change, the arrival of diseases that undermined agriculture, the war of 14-18, the great frost of 1956 which led to population decline and impoverishment of the inhabitants, most of whom fled to neighboring towns.

In the 1950s, after a period of crossing the desert, the destiny of Gordes takes a new impetus. A plethora of artists, sensitive to the beauty of the village, fell under its charm and found in its isolation, its ruins, its light and its landscapes, a source of inspiration.

Today, the village, classified as one of the Most Beautiful Villages in France, is a popular destination of international renown.

- The imposing 10th century fortress castle dominates the village of Gordes and was redesigned during the Renaissance. It can be visited and houses the Pol Mara Museum, a contemporary Flemish painter and inhabitant of the village.

- The cellars of the Palais Saint Firmin, which are dug into the rock and their underground facilities: cisterns, oil mill ... Classified as Historic Monument.

- The very pretty church of Saint-Firmin, of Romanesque origin, which was heavily rebuilt in the 18th century, is not to be missed.

- The Aumonerie Saint Jacques. Considered as a chapel or a guards' room, the Saint-Jacques chaplaincy was in fact a hostelry for the pilgrims going to Santiago de Compostela.

A walk in the village of Gordes offers, at the bend of a winding calade (cobbled streets), magnificent views of the surrounding area. Vaulting, arches, sundials, dates engraved in stone, cistern or silo (terrace theatres), the Lower Fountain (former wash-house), mansions, bourgeois houses...

To be seen in the surroundings of Gordes...

- The village of Les Bories, 4 km from Gordes, where all the buildings are entirely built in dry stone. Museum of rural habitat, classified as a Historic Monument.

- The Abbey of Sénanque, 3km from Gordes, t one of the jewels of Romanesque art, which has become one of the symbols of Provence. Enchased at the bottom of a valley, it is still inhabited by Cistercian monks, since its construction in the 12th century. Listed as a Historic Monument.

- The Moulin des Bouillons, 5km from Gordes, is a very well preserved old oil mill. A Gallo-Roman site inhabited for 2000 years, it relates the history of olive oil and Marseille soap in the Mediterranean. Located on the road to Gordes, in St Pantaléon, in the heart of a 3-hectare park, where the Glass and Stained Glass Museum is also located.

Hiking enthusiasts will be able to discover the troglodyte water mills in the Gorges de Véroncle.

Gordes, one of the most beautiful villages in France