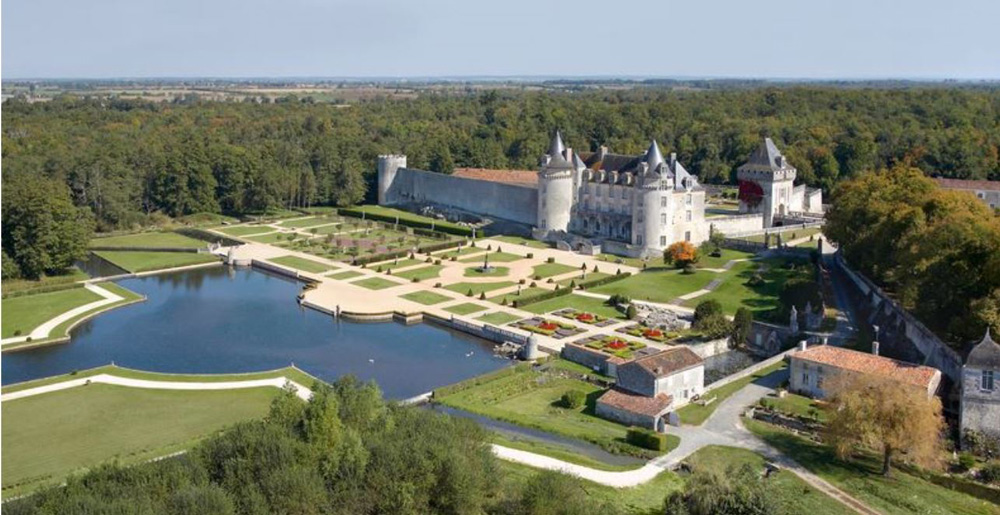 After a first partial classification in 1924, the castle, all the old buildings, the terraces, the moat and the gardens were classified as historical monuments by decree of September 17, 1946.

The gardens have also been labeled "remarkable garden" since 2004.

Around 1475, Jehan II de Latour had a fortress built consisting of two main buildings, with four powerful towers and a massive keep.

This fortified castle, built in the shape of a triangle on a rocky spur, is naturally defended by the marsh.

To the north, in advance, the tower of La Fuye stands guard. After three centuries of conflict between the French and Anglo-Aquitans in the region, it is not possible to build a castle other than strong and defensive.

In 1603, Jacques de Courbon, having married Jeanne de Gombaud in 1595, totally freed Romette from a one hundred and thirteen year-old indivision. It is then that granting the vocables of La Roche and Courbon, appears La Roche-Courbon which will be henceforth the name of the place.

In the 17th century, Jean-Louis de Courbon, grandson of Jacques, transformed La Roche-Courbon into a town of the same name.

The castle is at the height of its beauty, surrounded by sumptuous formal gardens that will see the light of day before those of Versailles.

The main building opens up to the light: large windows are pierced at sunrise and sunset, the roof is equipped with Mansard-style openings.

A double landing staircase leads down to the gardens.

The surroundings are harmonized with a high wall overhanging the river and a shouldered esplanade.

The 18th century suite did not see many owners except, in 1785, the Marquis Sophie-Jacques de Courbon Blénac who, for 240,000 pounds, regained the family property.

One of the former owners of the castle was Jean-Baptiste Mac Nemara, lieutenant of Frégate and ensign of a naval company, who married in 1713 Julienne Stapleton, daughter of Jean I Stapleton, one of the first Irish of Nantes.

As the Revolution came and the marquis did not emigrate, the castle was not sold as a national asset. In 1817, his daughter sold the estate at auction. Then begins the long sleep of La Roche Courbon, before its second rebirth in the 20th century.

Pierre Loti, who often went on vacation to his sister's house in Saint-Porchaire, fell under the spell of the abandoned château de la Roche Courbon, in ruins, in the middle of the brushwood.

Taking advantage of its notoriety, the writer saved the site through a press campaign and made this castle known, which he willingly nicknamed the "castle of Sleeping Beauty", the title of a beautiful text that he devoted to the subject.

Paul Chénereau bought and then had the estate restored, restoring it to its former splendor.

From 1928 to 1939, the French garden slowly blossomed and can be admired from the views of the estate.

The castle is restored and furnished.

In the gardens, on the parts added by Ferdinand Duprat, an important area had been conquered on the marshes.

Today, the Château de la Roche Courbon is open to visitors all year round and also offers rental rooms for weddings and all kinds of professional or private events.

Rochefort and the only ferry bridge in France...

label Remarkable buildings Amazing... isn't it? Made in Grand Sud

The Museum of the Treasures of Talmont and Fishing

The door of the big clock, emblematic monument of La Rochelle