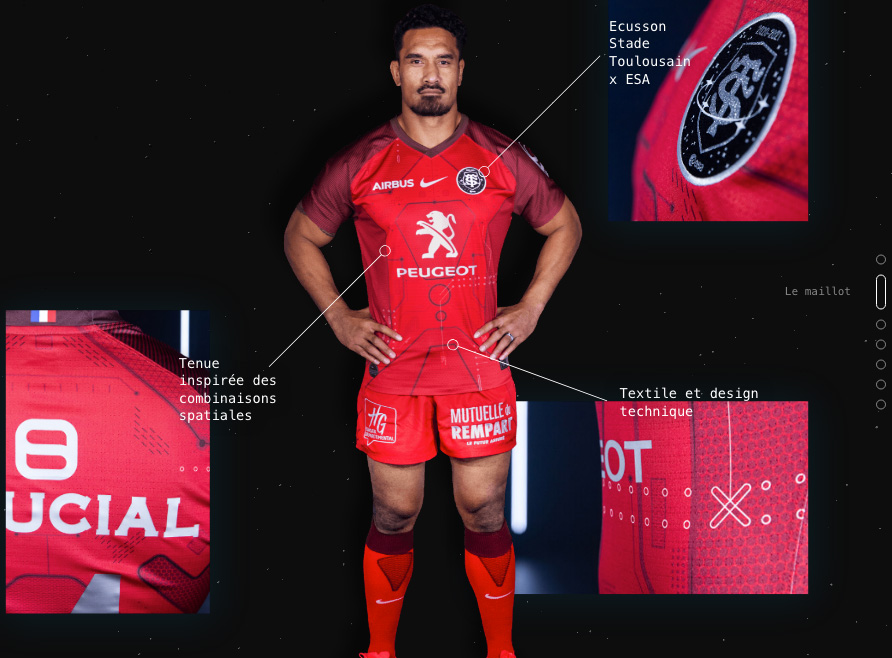 info_outline
You are here: Home / Regions / Occitany / 31-Haute-Garonne / The Stade Toulousain to conquer the stars with Thomas Pesquet

The Stade Toulousain to conquer the stars with Thomas Pesquet

The Stade Toulousain, in exclusive collaboration with the European Space Agency (ESA) and its astronaut Thomas Pesquet, has created a new jersey, Champions Cup, season 2020-21.

This new outfit is inspired by the Proxima mission, during which Thomas Pesquet took the Stade Toulousain colors on board the International Space Station (ISS) for the first time.

During the Proxima mission, Thomas Pesquet took a balloon from the Stade Toulousain, he who studied in the Pink City and remained very attached to it.

Since then, he has become an ambassador for the club. Somewhere, he took us into space with him," explains President Didier Lacroix. Our idea was: what more can we do together? With his simplicity and his kindness, he thought with us to elaborate this jersey. The symbolism is strong, as much as the desire to make history. I hope that the sporting result will be worthy of this tunic. »

This new jersey offers a design that echoes the lines of the space suits worn by astronauts and features multiple details reminiscent of Thomas Pesquet's mission, which is currently preparing another mission ("Alpha").

"I am very honored by the tribute that the Stade Toulousain is paying to my first space mission with this very special jersey. This collaboration has allowed me to meet two universes that are dear to me: space and rugby. He confessed, "I'm very happy.

A singular logo was also placed on this tunic with the inscription of ESA on it, as well as four stars in reference to the club's titles in the competition. On the collar, it is also inscribed "to the conquest of the stars".

Originality of this new jersey: it is connected. It includes a QR code. By flashing the QR code present on each jersey sold with his phone, the Stade Toulousain fan will have access to exclusive content.

The Stade Toulousain is inspired by all the science provided by ESA through the first mission of Thomas Pesquet. An inspiration to rise, a recognition of excellence.

"It is important to know that we have also done something collector's item. Thomas Pesquet was in space for 196 days. So we created 196 collector's boxes where there will be inside an official match jersey for the players, a letter written and signed by Thomas Pasquet as well as other accessories", said Vincent Bonnet, marketing director of the Stade Toulousain.