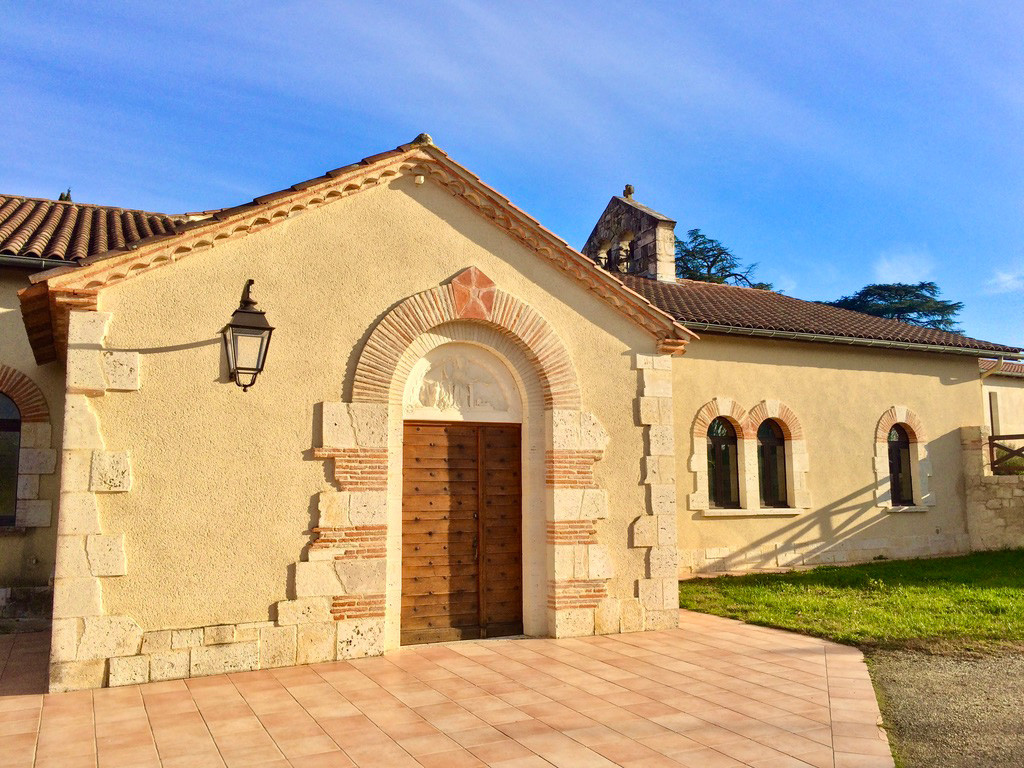 Welcome to New Aquitaine, to the Benedictine monastery of Sainte-Marie de la Garde. The monks are known (and made headlines in September 2019) for their leather sandals. Yes, yes, from raw leather, they make many sandals, in different models, for individuals and religious communities! As what, the craft of the monks will continue to surprise ...

The 17 Benedictine monks, currently installed on site since 2002, come from the Barroux Abbey in Provence, as a "foundation"!

By their traditional observance of Benedictine monastic life, they are thus among the only ones in France to wear the tonsure!

You will be able to see it in particular if you attend one of their services one day in their church!

But let's come back a little bit to the origins of this community, which has not finished surprising us...

The origins of the monastery of the Guard

As we told you, the monastery Sainte-Marie de la Garde has its origins in Provence, in the abbey of Le Barroux (its mother house). Dom Gérard, the founder of the abbey, is a former monk from Tournay, and seeks a more traditional monastic life, and isolates himself for this as a hermit. But very soon many postulants are attracted by his life... and a community is created. After years and long work, in 1989, the community was able to settle in Le Barroux! The community grew so quickly that they were sixty monks in 1999: it was now necessary to think of creating a foundation... and this is precisely the birth of the project of the monastery of Sainte-Marie de la Garde, near Agen!

In 2002, eight monks from Le Barroux arrived at the top of a small valley, at the place called "Lagarde", to give new life to the walls of an old medieval fort. It is the creation of the monastery Sainte-Marie de la Garde. The old mansion house gave way to the refectory and the sheepfolds were transformed into workshops or chapel. Everything is local: the Benedictines use the Puymirol stone, the Agenian tommettes, and create a wall bell tower (common in this region). The chapel is also dedicated to Saint Foy, a local martyr who died in 303!

And in front of the dynamism of the community, the monks are now obliged to make new works to welcome the new postulants with dignity! In 2010, major work was launched to restore the current buildings, then to build a cloister and an abbey church, making it possible to welcome a total of 40 monks!

And what about today?

Today, 17 Benedictine monks live in the monastery of Sainte-Marie de La Garde and follow the rule of Saint Benedict: "ora et labora" ("prayer and work"). They pray eight times a day. The first service is at 3:30 a.m.! To balance the times of prayer, the monks work with their hands to ensure their subsistence. In addition to the usual tasks (hotel business, store, housework, classes...), the monks of La Garde monastery are specialized in making sandals and harvesting nuts.

The products of Sainte-Marie de la Garde monastery (especially their honey with hazelnuts and walnuts with honey) are available on site at the abbey, in stores all over France, as well as online at Divine Box :https://divinebox.fr/categorie-produit/producteurs/monastere-sainte-marie-de-la-garde/

- The coat of arms of the monastery represents a cedar under a star. The cedar (biblical symbol), suggests quiet strength, correctness, patience. The star refers to Mary, as well as the motto "respice stellam" in Latin, means "look at the star".

- The brothers make three models of sandals: the Hildegard and the Scholastics for women (with a heel), and the Benedict for men. Even if it is rather rare, the monks also sometimes make repairs and custom-made models!