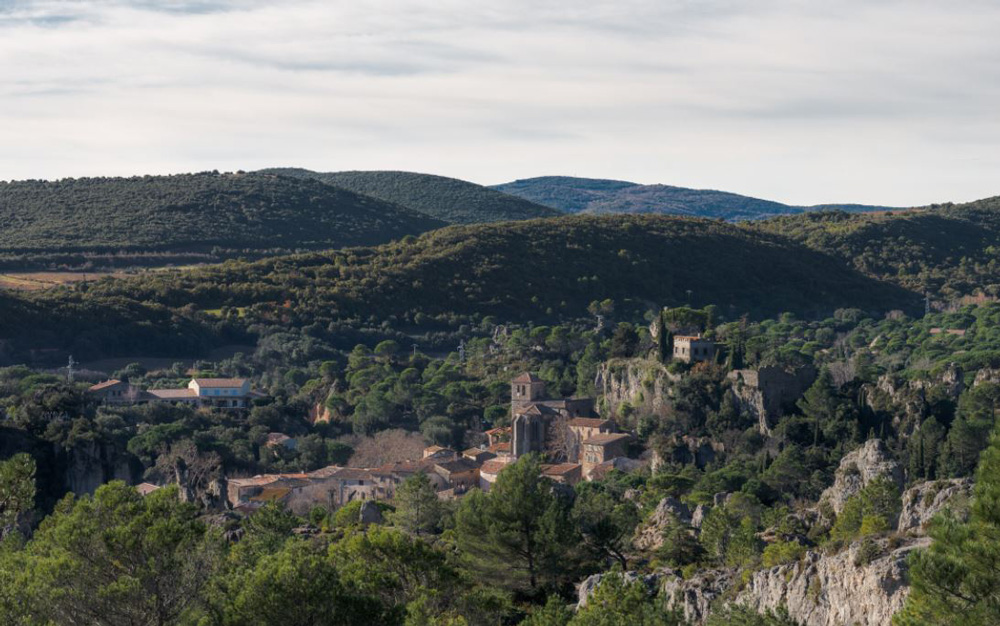 info_outline
You are here: Home / Regions / Occitany / 34-Hérault / What a circus!

The dolomitic cirque of Mourèze is close to the Salagou lake and the village of Villeneuvette.

Erosion has shaped a landscape with extraordinary shapes including rocky pinnacles with sometimes suggestive shapes.

The pinnacles are named: the Sphynx, the Guardian, the Oracle, the Bear and the Shepherd, the Blast Furnace, the Cerberus, the Watchman Tower, the Breach Tower, the Chicken Tower...

Some of these petrified columns take strange shapes, evoking a human skull, the silhouette of a bird of prey or a phallus.

In total, more than 70 rock statues have been catalogued.

One of the scenes from Jean-Pierre Mocky's film "Le Bénévole" shows a madwoman "languorously rubbing herself" at the base of this pinnacle with such a peculiar shape.

The circus of Mourèze, once sheltered men in prehistoric times, then welcomed the charcoal burners and shepherds.

The site was excavated for the first time by G. Vasseur in 1911, and several remains from the Final Bronze Age III are on display at the Musée Borély in Marseille.

From 1920 to 1980, the writer Gaston Combarnous (1892-1987) interested in the place published two monographs and was the first to produce a cartogram of the circus. He carried out several surveys and gave a name to most of the rocks.

Settled in 1940 in Mourèze, he wrote several scientific works, but also novels about the region.

At the beginning of the 1960s, the Association des Chênes Verts carried out several surveys on the Courtinals site.

Their research concluded that the site was occupied from the Middle Neolithic to the beginning of the Iron Age.

During excavations carried out in 1991, a Bronze Age hut was found in a good state of conservation and the foundations of a Chalcolithic construction were uncovered.

Today, the absence of a herd allows vegetation to cover the site, which is mostly frequented by walkers who come to get lost in the natural labyrinth of its strangely shaped rocks.

For more information on the village of Mourèze and its dolomitic cirque, download its  livret patrimoine  and discover its history.
Have fun with your family, while discovering the heritage of the village with the Randoland booklet.
On the spot, it is possible to make two hikes, download their hike sheets:

- The circus of Mourèze

label Records: The +'s and -'s cities and villages