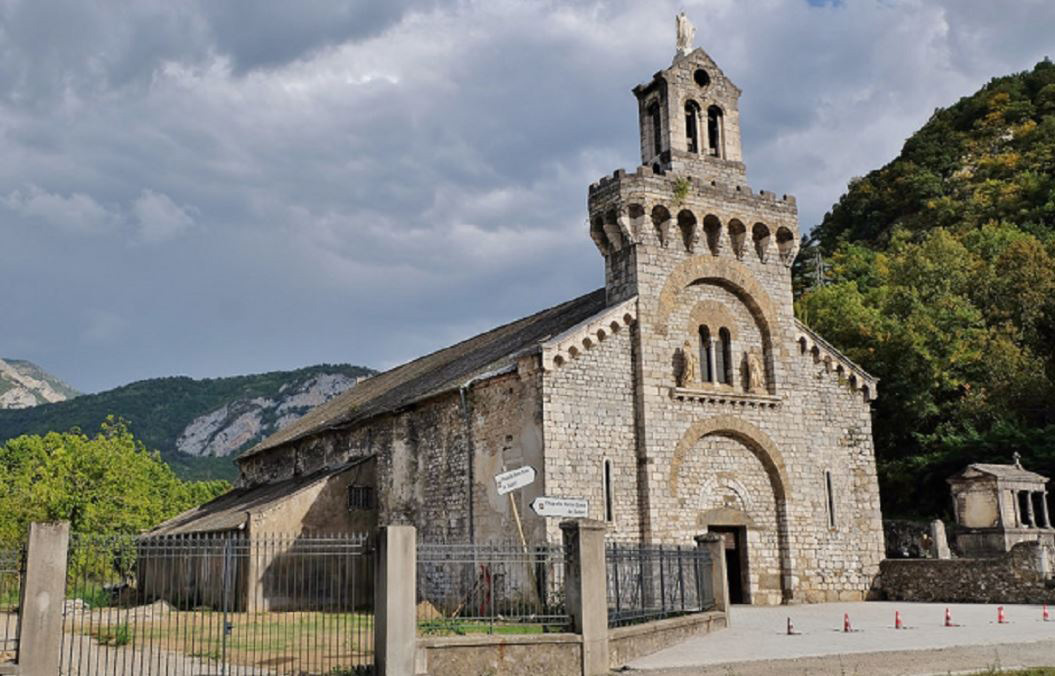 By its beautiful religious ceremonies, its ancient sanctuary, its history, Our Lady of Sabart, at the exit of Tarascon in the direction of Andorra, attracts, every year, a large crowd of pilgrims and tourists. They unite to the worship of the Virgin the memory of the "Great Emperor with a flowery beard", paladin of Christianity and liberator of Christianity: Charlemagne.

The building seems to date back to the twelfth century, to that period of religious faith when the world rejected its antiquity "to dress freshly in white sanctuary finery" .

According to the legend, a fantastic tale passed down from age to age in popular memory, here is the origin of the miraculous chapel, dedicated by Charlemagne to Our Lady of Victory after a battle where the Saracens were defeated in the nearby plain.

The Saracens had brought ruin and desolation throughout the Sabarthes. Their hordes had spread through all the valleys along the Ariège and its tributaries. Towns, villages, churches, monasteries, everything had been destroyed in this part of the Ariège Pyrenees.

Already, the resounding noise of the weapons had ceased or was fading away, the echo of the mountains no longer echoed in the distance the wild clamor of the melee. The hated infidel reigns supreme in these Valleys, "whose death, flight or the ironing of the slave have made a desert".

A few years were enough to make disappear from this ground, where the Romans had stayed for a long time, where their temperament of builders had raised temples to their gods, fortresses to their legions, any civilization and any vestige of human progress.

This domination lasted thirty years, Charlemagne and his lieutenants will carry the last blows to him.

Each stage of the liberating crusade of the Franks will leave an indelible mark on tradition.

Charlemagne relentlessly pursues the cursed Saracens and pushes them into the gorge where the Ariège River flows. Suddenly, on a wasteland that offers to the eye only a sad and stunted vegetation, at the foot of a mountain whose thick woods darken the croup, the palefroi of the Frankish king stops in terror. Charlemagne stimulates in vain the courier who remains motionless.

Three times, he drives the spur into the horse's flanks.

Three times, the animal retreats. However, the squire throws himself forward. No sooner has he taken a few steps than he suddenly sees himself surrounded by enemies, who have come crawling in the night to spy on the movements of the Christian army.

The great conqueror sees the danger threatening his servant.

He already hears the rattling of weapons. His impatience redoubles. He shunts his steed again, but the steed does not advance. A secret power attaches his foot to the ground.

Then Charlemagne jumps down from his mount. With a leap he joins his companion. Stimulated by a supernatural force, the Franks slaughter every last one of the adventurous Saracens.

After the fight, in the place where the palefroi reared up, a bright and radiant virgin of beauty appears.

The apparition fades away as the peaks begin to light up.

The chief has understood the divine sign. He gathers his troops at the place of the miracle. Two white heifers, hitherto untamed and led by the king himself, explore this mysterious land.

The king discovers a statue of bronze, which is solemnly erected on a stone altar where an invisible hand has engraved these prestigious words "Our Lady of Victory". Vainly, Charlemagne decided to endow the basilica of Saint-Nazaire in Foix with this miraculous treasure and had it transported to the ancient city grouped around the rock.

Twice, the statue returned to the wild site where it appeared to the Christian king.

No more doubt possible. It is on this uncultivated moorland, at the foot of these steep mountains, conducive to meditation and prayer, that the Virgin wants to be honored.

It is there that gratitude and piety will raise a shrine to her and that in the centuries to come, the people of the region will eternalize, through an annual pilgrimage, the victory that freed their fathers from the most odious of oppressions.

What emerges from a visit to the ancient Pyrenean sanctuary, recalling the origins of France, is the impression of the duration, the continuity of the venerable traditions that link us, despite revolutions and over the ages, to the ancestors who sleep under the earth.

What we take away from Sabart, an eternal place of religious fervor, is the idea of the once marked in all things, not immobilized in rigid attitudes and dead magnificence, but intimate, familiar, mixed with the humblest and simplest acts, melted into the present and living with it, of an indomitable and tranquil life that flows slowly through the centuries.

label Gastronomy [to eat] Amazing... isn't it? Made in Grand Sud