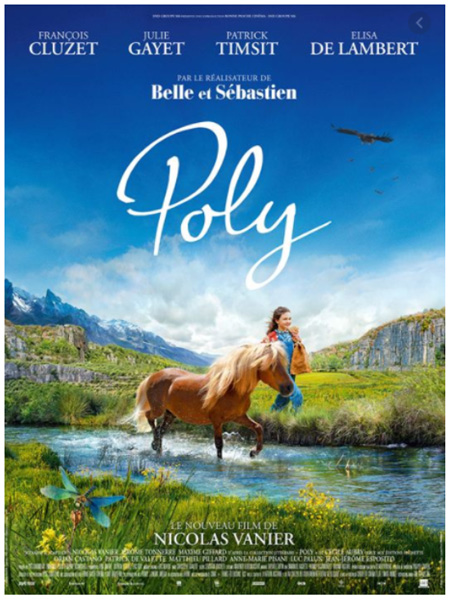 info_outline
You are here: Home / Regions / Occitany / 30-Gard / Poly's return to the Cévennes

Poly's return to the Cévennes

Delayed because of Covid, Nicolas Vanier's film "Poly" is released on October 7, 2020.

The story is based on Cécile Aubry's eponymous television series of the 1960s and tells the story of the friendship between a child and a pony.

The film was shot in May and June 2019 in the Cévennes with French stars François Cluzet, Patrick Timsit and Julie Gayet, as well as little Elisa de Lambert to play 10-year-old Cécile, the central character on the human side.

The film's animal star, Poly, was played in turn by seven chestnut ponies!

Two of them, Hulysse and Jack, belong to Roland Bossard, a trainer from Ruffigné near Châteaubriant in Loire-Atlantique.

This was not the first cinematic experience of this specialist in equine dressage, but previous ones date back to the 1980-90s.

The same pony could not play all the scenes, so many different ponies were used, depending on the type of scene.

Just like the human actors, the ponies hired for Poly had to go through the make-up box before each shooting, knowing that it is impossible to find seven identical ponies.

So they were made up to look exactly the same colour and wigs were put on.

On the screen it was Hulysse who played the lying down scenes, while the curtsies were performed by Jack.

A surprise guest came on the set, the former President of the Republic Francois, Holland came to see his girlfriend Julie Gayet filming.

He had lunch in the canteen like everyone else. It's only natural...

1964. Louise with her 10-year-old daughter, Pascale, returns to a small village in the Cévennes where she spent her childhood holidays.

The village is dominated by a medieval castle half in ruins and occupied by a strange character: Victor.

While Pascale struggles to make friends with her new friends, she discovers that a travelling circus is settling in town. Amazed and fascinated by the show, Pascale meets Poly, a young pony who turns out to be mistreated by the circus owner Mr. Brancalou.

Shocked and outraged, Pascale imagines a ploy to get the pony out of his fenced enclosure.

Little by little, a relationship of trust is established between the child and the animal.

You can also rediscover the Sautadet waterfalls.