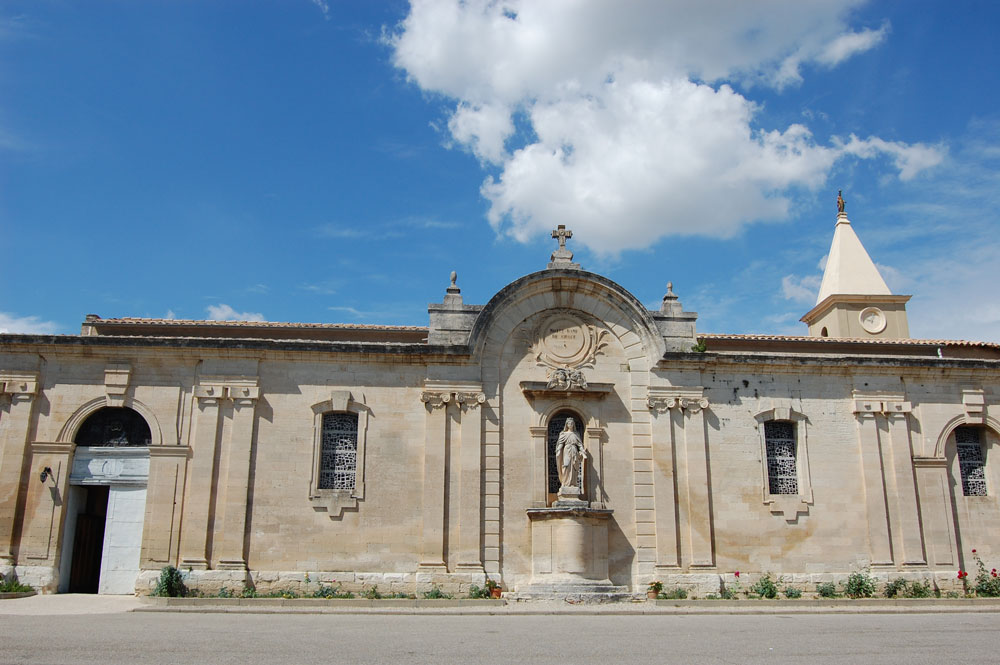 With its vaulted nave, its baroque altar, the heart of the Chapel, the museum of ex votos, the large corridor of the religious, the hall of confessions with astonishing acoustics, the great Calvary of the 19th century. Notre Dame de Grâce is a picturesque place to see.

A mysterious sanctuary with a breathtaking view of the plain and the Mont Ventoux, the sanctuary of Notre Dame de Grâce has had a very special history that borders on legend....

Charlemagne would have erected the chapel of Rochefort called Our Lady of the Blessed Virgin and of the Holy Victory, to perpetuate the memory of the triumph of his armies over the Saracens.

A family story of sorts...

In 798, built on a small hillside near Rochefort du Gard, the chapel is a simple building of small dimensions (12m x 6m), of Romanesque or Carolingian construction. In the Middle Ages the terms Notre Dame and Sainte Victoire coexisted. The coming of the popes in the 14th century gave it a new notoriety. From the 15th to the 16th century, it falls into abandonment, transformed into a sheepfold.

At that time, there is a black virgin with child, burnt by a hermit.

In the 17th century, the chapel was restored and enlarged and became the Church of Our Lady of Grace (1696). It has 3 naves and upper frescoes depicting a starry sky. A monastery is attached to it. After the Revolution, the demolition is envisaged, the sanctuary is entrusted to the Marisques Fathers who find only ruins that they will repair for

build a hotel and a monumental Calvary of 3 crosses with its Way of the Cross composed of about fifteen small domed buildings in oriental style.

Today you can still see the church, the spectacular Calvary and its Way of the Cross, the monastery and an esplanade.

Our Lady of Grace went down in history for her 70 miracles.

In the 12th century, a shepherd found a statue of the Virgin in a cavity when lightning shattered the rocks of the mountain. The sanctuary quickly became a place of pilgrimage until the 14th century, the period of the great plagues. It wasn't until the 17th century that it became famous again after a series of miracles occurred there - a fire broke out at Rochefort which stopped abruptly at the foot of the sanctuary, blind people regaining their sight, dead children being resurrected, healing of convulsions, fever, paralysis,... in total, more than 70 miracles.

Pilgrimages attract up to 40,000 people in 3 days. In the 19th century, following renovations, renewed interest appeared with the return of the great pilgrimages which lasted until the Second World War. Today, Our Lady of Grace is a place of prayer, reflection, formation, welcome and charity. The diocese animates and manages the shrine.