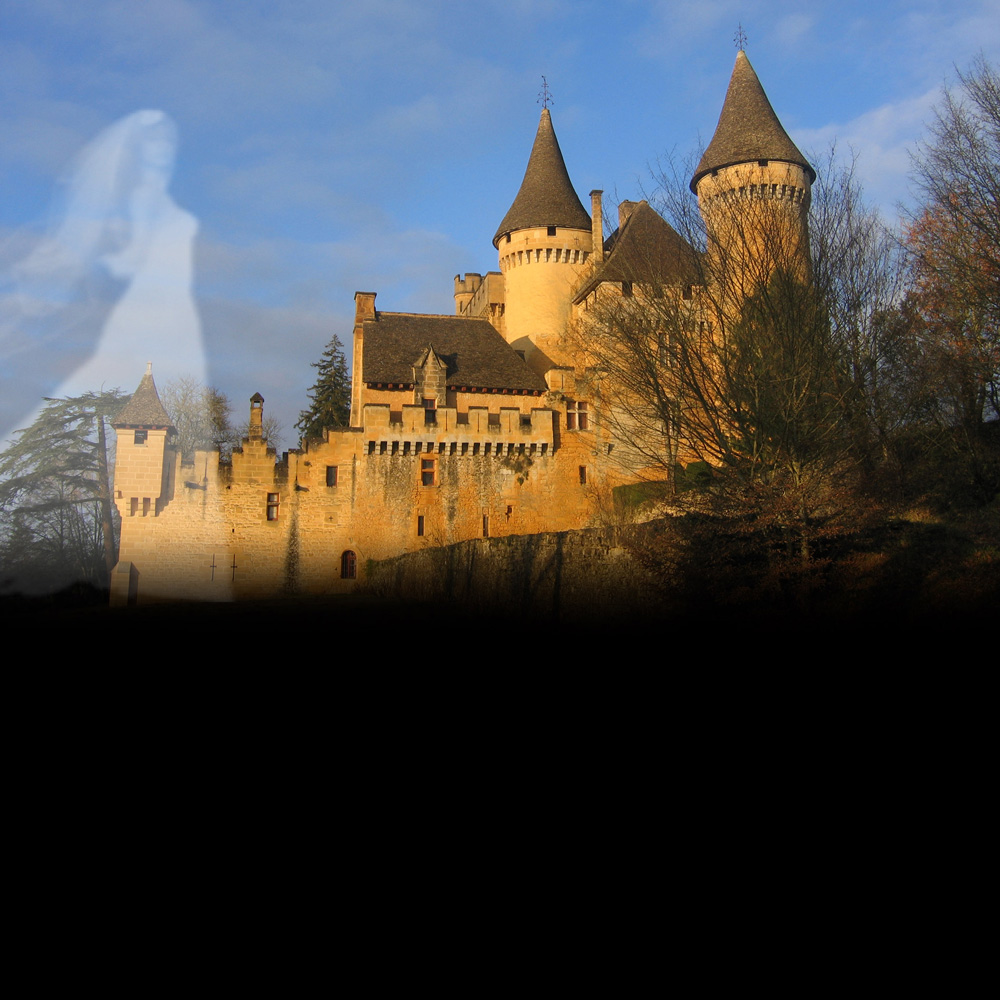 info_outline
You are here: Home / Regions / Nouvelle Aquitaine / 24-Dordogne / The castle of Puymartin and the shadow of the White Lady...

The castle of Puymartin and the shadow of the White Lady...

Between Sarlat and Les Eyzies, the castle of Puymartin, is an impressive fortress inhabited, for five centuries, by the same family and for five centuries also, associated with a famous legend in the Black Perigord.

The construction of the Château de Puymartin dates back to the 13th century around 1269. The abbots of Sarlat gave it in fief in 1271 to the Serviens family.
This castle was also on the border between France and England when the Hundred Years War began in Perigord. A truce of two years was concluded in 1356 between Jean Le Bon, after his defeat at the Battle of Poitiers and his cousin, Edward III of England. As France remained without a king, it was not respected and English mercenaries committed all sorts of robberies, sackings and pillaging in the region, in Périgord and especially in Sarlat. They stormed Puymartin, which fell into their hands on 8 January 1357. The well-known warlike practices of these mercenaries, attacks, among others, of merchant convoys going towards Sarlat, the Sarlatians decided to send their representatives, the Consuls, to pay for their departure with a strong ransom. And, to prevent any new occupation of the site, the crenellations, the ramparts of the walls and roofs of the castle were removed, destroyed and the floors torn off. Puymartin remained in ruins throughout the Hundred Years' War.

In 1450, Radulphe de Saint-Clar took over the castle and planned its reconstruction and extension. Over the generations, conflicts and lawsuits opposed the lordships of Puymartin and Commarque, due in large part to the recovery of property that had belonged to that of Commarque weakened by the Saint-Clar. The construction of Puymartin had been planned in order to fight against the power of the Lord of Beynac, then owner of Commarque.

In the 16th century, Raymond de Saint-Clar, grandson of Radulphe), leader of the Catholics in Black Perigord, established his headquarters in Puymartin and drove out the Huguenots from Sarlat under the command of Turenne, the dreaded warlord.
When the French Revolution began, Puymartin belonged to the Marquis François Roffignac de Carbonnier de Marzac who managed to keep it and the three other castles he owned, (Marzac, Reignac, Lasserre del Dugat.
At the end of the 19th century the Marquis Marc Roffignac de Carbonnier de Marzac who devoted one million gold francs, about 3 million euros to its restoration. This owner had only one daughter who married Count Jacques de Montbron in 1920.

"The castle lives in us, more than we live in it! ", laughs Xavier de Montbron, current owner.

"Built in the thirteenth century, destroyed during the Hundred Years War to prevent it from being used as a base by the English, rebuilt in the fifteenth century by Radulphe de Saint-Clar, one of the ancestors of the current owners, the castle, abandoned, was restored in the late nineteenth century by the Marquis de Carbonnier de Marzac. »

The Castle and the Legend of the White Lady

One enters by the Saint-Louis courtyard, the castle then offers many treasures such as the Aubusson tapestries of the 18th century, the chimney "painted in trompe-l'oeil in the 17th century" the room of honour, or the "French ceiling of the Great Hall" decorated with Flemish tapestries.

And then, and then we head towards the North Tower which remains associated, since the 16th century, with a dark legend.

It is said that Jean de Saint-Clar, when he returned to the castle after having distinguished himself in battle, surprised his wife Thérèse in the arms of a young lord of the neighbourhood. He killed her here and, jealous and angry, he locked his wife in the tower. She died there after "fifteen long years of repentance".

The door was walled up, through the little trap door she was brought her food, she slept on a bad mattress, in this little corner and the chimney allowed her to heat herself and cook, moreover there were two bars at her window to prevent her from escaping.
When she died, she did not leave this room, because her body was walled up there and since a legend says that Therese would come back to haunt the castle in the evening around midnight: she would walk up the stairs, in her room and on the covered walkways. This is the ghost of the White Lady: some inhabitants of the castle have met her, as well as visitors to the castle.

Xavier de Montbron says, calmly: "In all these years, I have never met her, but my father, Henri, who died in 2002, has. And on several occasions. I must confess that his encounters with the White Lady really turned him upside down. He had a hard time getting over it. »

The owners, however, do not wish to dwell on the subject, which has all too often turned visitors' heads. For thrill seekers, a magnificent guest room has been set up in a room of the castle. It is regularly rented by lovers of the paranormal...

The legend of the Dordogne Coulobre

Le Gouffre de Proumeyssac, Cathedral of Lights, where the visitor produces his electricity