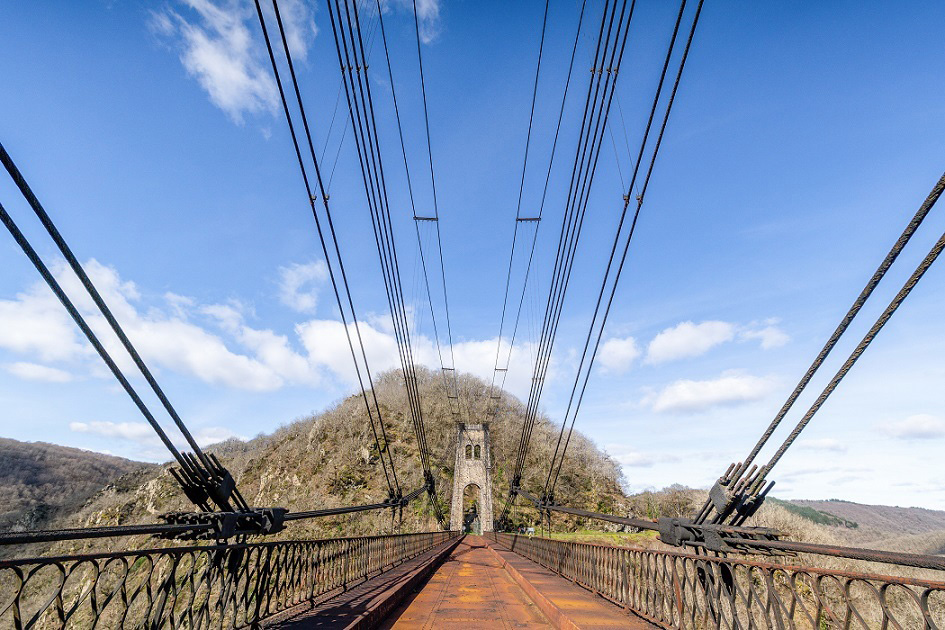 Located in the communes of Lapleau and Soursac, this daring structure, formerly known as the Roche-Taillade viaduct, was built by the Société des tramways de la Co

As I have already written in another article pointing out something unusual in Baugé in Anjou, namely floating gardens, I like to quote this pretty introductory phrase from the city's official website: "Overworked city-dwellers, friends of nature, nostalgic, curious about the past, painters and poets find in Baugé the art of living in the serenity, harmony and simplicity of yesteryear". Evocative and seductive...

And indeed... you will stroll peacefully, with pleasure, along its streets. The city boasts 140 monuments listed in the general inventory of cultural heritage, including 11 historical monuments! Its old quarters hide picturesque alleys that take you from the Middle Ages to the 19th century!

And then there is the hospital, the hospital whose construction began in 1639, and which after 350 years of activity, opened its doors a few years ago for a journey called "from the care of the body to the care of the soul", and which describes the activities of the Hôtel-Dieu from the 17th to the 19th century .

And then, at the heart of this building, there is the apothecary...

It is recognized as one of the oldest in France, and one of the best preserved.
But, moreover, it is a jewel!

Etymologically, the word "apothecary" means "to keep, to preserve", from a Greek root, and "shopkeeper" from a Latin root.

It is therefore a place, a room, in which raw materials, plants, minerals, or other elements from the living, such as crayfish eyes ... or the famous dragon's blood!

The apothecary was furnished and equipped between 1675 and 1700.

Today, there are still more than 600 jars and various containers, made of wood, glass or earthenware, which are still admired.
Many of them still contain the powders and preparations of the time. In a small glass bottle, there is even the fingertip of a mummy, which is said to have helped in the healing process...

This is a unique collection including among others 16 albarelli, 91 pill boxes, 95 goat cheeses, 79 jars-cannon! So many mysterious terms, corresponding to so many different containers, since it was customary at the time to use specific pots according to the consistency of what they were to contain.

And the piece itself!

It is a marvel!

All these pots, all these boxes, are arranged on Louis XIII style oak shelves and five twisted walnut dressers.
On the floor, a coffered oak parquet floor, assembled and pegged, has a marquetry pattern representing a sun in the centre.
The ceiling is made of painted chestnut wood, imitating white and red marble, and includes 11 coffers dotted with gold stars, underlining the importance of astrology in medicine at the time.

As you can understand by reading these lines, we are well beyond the unusual. We are in the use of extraordinary means, sought with faith and patience, in an equally extraordinary environment, equal to the importance given to the relief of contemporary ills. Do not hesitate to immerse yourself in this very special atmosphere...

rrèze from 1911 to 1913 using a system invented by the engineer Albert Gisclard. It spans the Luzège gorges at a height of 92 metres and a length of 160 metres.

Inaugurated on 1 August 1913 by President Poincaré, it was used until 1959 by the "Transcorrézien", a picturesque "tacot" which criss-crossed the countryside from Tulle to Ussel and put these two towns within 8 hours of each other.

Of the forty or so similar structures built in the world, only five remain today, including this viaduct.

Although the bridge is unfortunately no longer accessible to the public, it can still be admired from a Himalayan footbridge installed below. Overhanging the Luzège, the latter not only allows visitors to enjoy an incredible view of the viaduct, but also allows walkers and hikers to connect the two banks of the river and to again take the entire Transcorrézien paths, between Tulle and Ussel.

Located in a territory classified as a World Biosphere Reserve by UNESCO, this viaduct embodies a strong challenge for the territory and will be part of a global cultural, heritage and nature sports tourist route.

Recently, institutional and private partners have joined forces in order to carry out a study to enhance the value of the surrounding sites. An interpretation trail is in preparation, integrating the Buse Rock, the Roche Taillade Festival and the Firmin Road.

The history of the "tacot" will be brought to life via the museum station at the Tournadoux site. Finally, the technical nature of the construction of this structure will be promoted through educational activities, offered in partnership with the school of civil engineering and public works in Égletons.

The bridge has been virtually intact since its creation. The suspension is the original one, except for the cables, which have been changed. Today, several structural points are sensitive, making its access dangerous.

Guided tours of one hour for groups and schools are offered by the ASTTRE 19 Association .

Curemonte, the "village of three".

Ségur-le-Château, the picturesque at every street corner