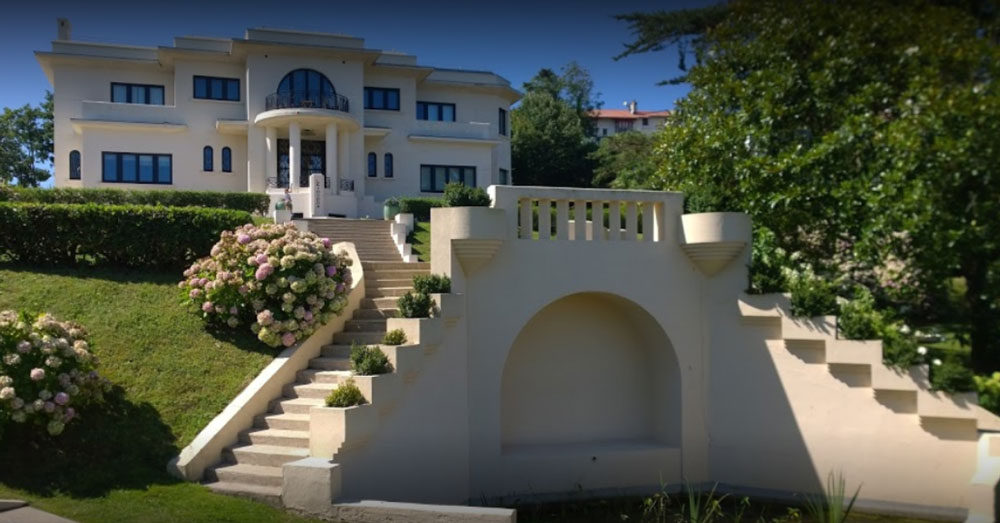 The Art Deco villa Leihorra, a jewel of Art Deco architecture of the Roaring Twenties

Ciboure offers an exceptional heritage with the fort of Socoa, a military structure built by Vauban, the convent of Récollets where King Louis XIV used to attend mass, the Bordagain tower, the remains of an old fortified church, the birthplace of Maurice Ravel (1875-1937), the tomb of Pierre Benoît (1886-1962), author of "l'Atlantide" and "Mademoiselle de La Ferté" and the Art Deco villa Leïhorra.

If you like Art Deco architecture, the Villa Leïhorra is a jewel. Expression of a refined art of living, it is for those who are looking for authenticity and harmony and who will appreciate and preserve a heritage that belongs to future generations.

The Villa Leïhorra enjoys an exceptional location, facing the Atlantic Ocean, and is a jewel of Art Deco architecture from the Roaring Twenties that has no equivalent in the Basque Country.

The architect Joseph Hiriart, son-in-law of Mrs Caroline Signoret, the owner of the villa, was given carte blanche to build the most beautiful villa on the Basque coast according to his mother-in-law's wishes.

A true "refuge on dry land", a translation of the Basque word "Leïhorra", it is a dialogue between the sky and the sea.

Built on the hill of Bordagain, it offers an unforgettable panorama. The layout of the villa from east to west according to the sun's path crosses the north-south axis of the basins.

It remains the absolute Art Deco manifesto intended by its creator.

Everything about the villa, down to the smallest detail, was imagined and designed by Joseph Hiriart, who invented volumes, proportions and shapes, composed of tiles, mosaics, parquet flooring, cremone bolts, chandeliers, wall lights and furniture.

He joined the collaboration of Art Deco artists and local craftsmen including the master glassmaker Jacques Gruber, the ceramist Cazaux, the designer René Prou, the glassmaker Daum, the landscape architects Gelos and the ironworker Jean Schwartz.

The Villa Leïhorra is one of the very rare examples of a private dwelling in the Art Deco style and period.