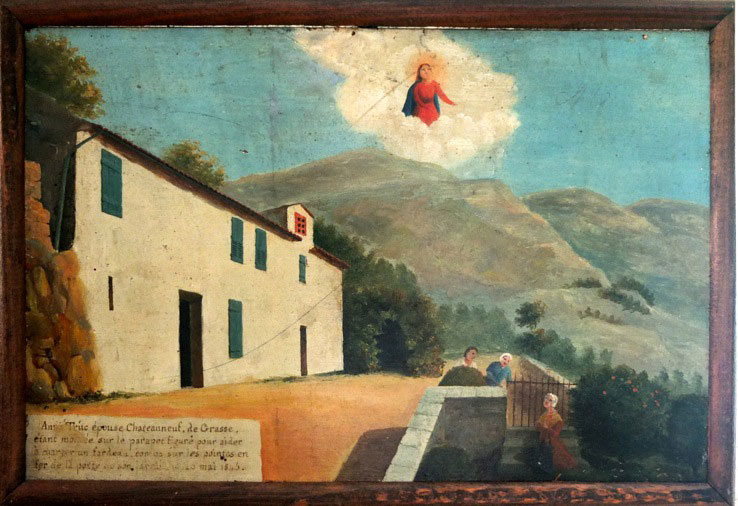 Created in 1982, this museum displays 160 of the most prestigious ex-voto's, which decorate the walls of the Sanctuary of Our Lady of Valcluse. These ex-votos have been restored, framed and saved from ruin like the rest of the Sanctuary.

All these ex-votos are precious souvenirs from another age, reminding us of the faith of the Anicians and Mary's love for France .

Observers and researchers will be able to study the details of the costumes and furnishings of the vanished ages.

From the point of view of faith, they will be able to admire the paintings that testify to the gratitude of those whom Mary consoled, healed and answered in their prayers, and if art is not for nothing in these paintings, one feels that the heart of man has remained truly believing.

The few lines that Fr. Abel de Sainte Thérèse wrote in his Monograph of Laghet are significant. "If these representations of the dangers and evils of human life, from which one has providentially escaped, do not often testify to the good taste of the artist, if the exaggeration, the grotesque, the realism of certain attitudes verge on caricature, this strange mixture of drawings and colours proves at least the extreme confidence of the people of the country in the intercession of Our Lady.

The first one is dated 1803 and represents a solemn procession. The year 1802 is a memorable date in the Church of France because the Concordat had just been signed and the cult re-established on a definitive basis. The ceremony of the re-establishment of the cult had been held that same year in Grasse, under the presidency of Monsignor Champion de Cicé, Archbishop of Aix, as a document of the time testifies: "On September 8, 1802, a procession of the Blessed Sacrament took place on the Place du Cours, where horrors of all kinds had been committed for too long. By the happiest of all changes, it was beautiful to see our compatriots and an immense crowd, inhabitants of the nearby countryside, prostrate themselves before the Holy of Holies, with all the more piety since for a long time we had been deprived of such an august spectacle. Returning at the end of the procession, Monsignor the Archbishop stopped at the main door of the hospital, and turning to the humbly prostrate people, he blessed them with the Blessed Sacrament.

The ex-voto, which bears no other legend than this date of 1803, was therefore executed, apparently to commemorate the date of the reopening of the old chapel. At the head of the procession that it represents, walk figures who may well be members of the Municipality or at least notable persons of the Town. Two of them detached themselves from the groups and opened wide the doors of the church to let the procession pass without hindrance.

The second bears the date 1805 and is a souvenir of the pilgrimage of the brotherhoods of the White Penitents and the Black Penitents of Grasse. An inscription covers the lower part: "Procession of the above-mentioned White and Black Penitent Brothers erected in congregations under the title of Our Lady of Mercy by Monsignor Jérôme-Marie Champion de Cicé, Archbishop of Aix and Arles, on 5 June 1805, to Our Lady of Valcluse".

The third one is similar to the previous one and executed for the same purpose and bears the date 1817 with an inscription in Latin.

Finally, the fourth is a small painting of some value. It represents the officially constituted National Guard of Grasse, coming to have its flag blessed in the Church of Notre-Dame de Valcluse on 6 August 1848.

According to pre-Revolutionary ex-votos, the statue of the Virgin, which is now on the main altar, is the same as the one that has been there since the foundation of the Chapel. According to the above-mentioned ex-votos of 1805 and 1817, it can be seen that at that time the plane trees and abalones in front of the chapel had not yet been planted. Only an avenue of cypress trees, of which three or four survive, led from the bridge to the entrance of the church. This bridge must have been the one whose abutments can still be seen.

Sanctuary of Our Lady of Valcluse