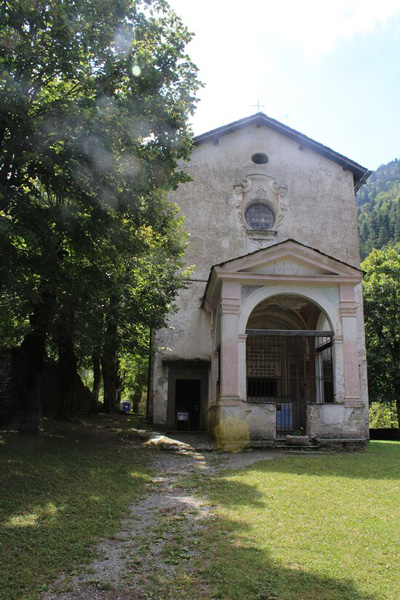 info_outline
You are here: Home / Regions / Provence Alpes Côtes d'Azur / 06-Alpes-Maritimes / From floor to ceiling, the extraordinary frescoes of Notre-Dame-des-Fontaines

From floor to ceiling, the extraordinary frescoes of Notre-Dame-des-Fontaines

Listed as a Historic Monument in 1951, Notre Dame des Fontaines is a Christian chapel decorated with 15th century frescoes, built on the remains of a pagan temple overlooking the 7 springs whose mysterious intermittency was long attributed to the divine power...
The sanctuary, nicknamed the "Sistine Chapel of the Alpes-Maritimes" houses 220 square meters of paintings, including a catechism recounting in 25 frescoes the passion, which plunges us into the beliefs and superstitions of ancient times.
Rich in symbols and forgotten texts, Notre Dame des Fontaines has not finished revealing its secrets.

A bit of History... and a lot of frescoes...
According to local tradition, the springs of La Brigue dried up, perhaps as a result of an earthquake. Unable to water their fields, the villagers vowed to erect a chapel to the Virgin Mary, if she would return the water to their countryside.
The springs began to flow again...
At the end of the 15th century, two Piedmontese painters, Jean Baleison (the choir) and Jean Canavesio, who was also a priest (the nave and the western wall), created an extraordinary decoration inside the chapel depicting the Life of Mary and the Infancy of Jesus, as well as the Cycle of the Passion and the Last Judgement.
"There are all the codes of the comic strip, bad guys with bad heads, good guys with halos. You can draw a parallel with American comics, it's not Super-Jesus but almost. These codes made it possible to bring to a naive reading and to mark the spirits", details Cyril Darius, guide at the tourist office.
"Basically, it was windowless, dark and the atmosphere was like in a movie: people must have been flabbergasted because it's quite violent, it shows things that are quite forbidden like the inside of bodies, the cavalcade of vices," continues Cyril Darius.
Like also the biblical character of Judas hanged. A demon with eagle claws and goat horns seems to tear a baby's body, symbolizing the soul of the traitor, from its slithering entrails. The painting of the Last Judgement is a fitting one: liars are stabbed, the greedy martyred by a man-headed winged serpent and figures indulging in lust are caught in the jaws of the Leviathan.
The licentious scene has disappeared, erased, as has the sex of baby Jesus, but these are the only two places that have been erased.
These frescoes were inaugurated on October 12, 1492.
Realized "A fresco", the paintings are in a remarkable state of conservation.
In Paris, the museum of the French monuments of the Trocadero, shelters the reproduction of a part of these exceptional frescoes.

Intact despite the storm of 2020
These frescoes were spared by the Alex storm that ravaged the Roya valley at the end of September 2020.
"We came quickly to check on the disaster (...) and, miraculously, compared to the destruction we saw (...), the valley had hardly moved, and neither had the chapel," Cyril Darius explains, relieved.
As a sign of the interest in this chapel, the town hall received calls from all over France to find out if the chapel was still standing...
The Chapel is to be discovered in natural light.