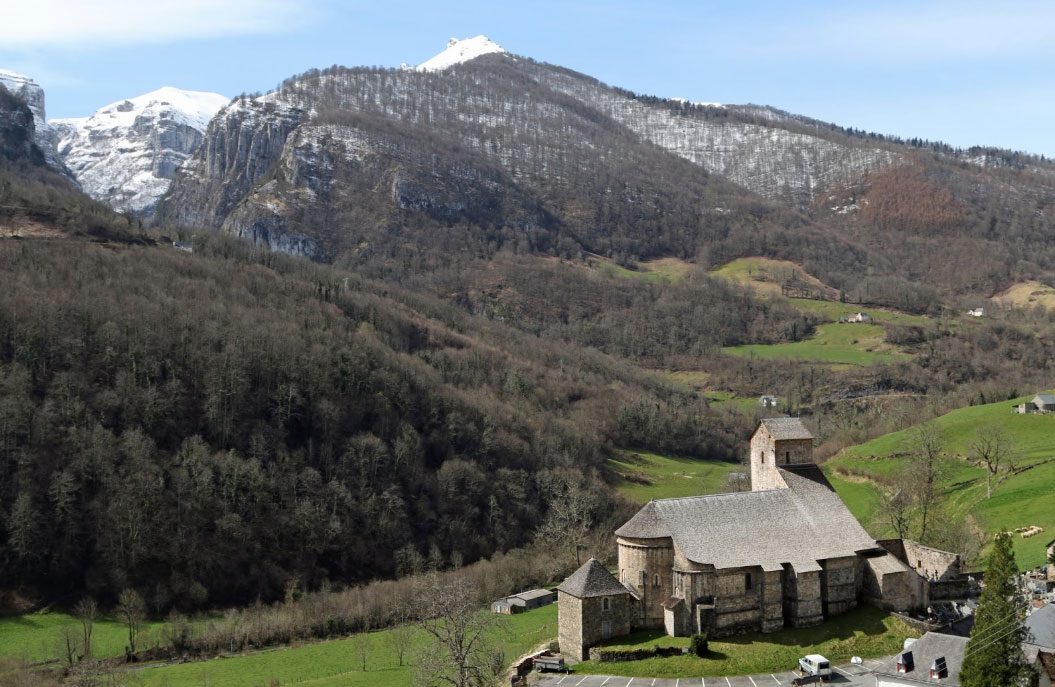 info_outline
You are here: Home / Regions / Nouvelle Aquitaine / 64-Pyrénées-Atlantiques / The church of Sainte-Engrace with its rare architecture, pure model of Romanesque art

On the site of Urdatx, the former name of Saint Grace, famous for the Kakuetta caves, the Navarrese abbey of Leyre built a Romanesque church in the 11th century dedicated to Saint Grace of Zaragoza.

The official name of the church Sainte-Engrâce des Ports, testifies that the village of Haute - Soule was a communication route between the two sides of the Pyrenees.

It is also one of the first centres of Christianisation from the Ebro Valley.

Going up the gorges of the High Valley of the Gave de Sainte-Engrâce, one does not expect to discover a masterpiece of Romanesque art at the end of the valley. And yet, the church of Sainte Engrâce in Haute Soule, will be classified as a historical monument in 1841.

The donation charter was confirmed by Pope Paschal II in 1100. In spite of its location at the bottom of a wild and difficult valley, the fame and prosperity of the monastery of Sainte-Engrâce is growing. Many pilgrims, on their way to Compostela, stop there to venerate the relics of the Saint.

The ascent of the Ehujarre Gorge allowed to reach the Roncal Valley, then the Abbey of Leyre, and then to continue the way to Compostela by following the Via Tolosana.

La Soule was occupied by the English, Navarre by the Spaniards cutting the links with the Abbey of Leyre. The wars of religion brought their share of desolation: archives, furniture and relics were destroyed and part of the estate was distributed to a neighbouring commune.

In 1622, when the Catholic cult was re-established, Sainte-Engrâce acquired a new relic and new furniture, but could not regain the splendour of yesteryear.

The church was classified as a historical monument in 1841, and around 1864 it was restored under the responsibility of the architect Emile Boeswilwald, and the work was spread out until 1905.

"The church has three naves, separated by enormous columns of carved stone. At the bottom of each one, three altars, with a high insulation grid from one end to the other, which served to protect the pilgrims' equipment.

There are also three chapels: the central one dedicated to Saint Grace, the one on the left to the Blessed Virgin, the one on the right to Saint Catherine. In the centre, on the vault, there is a mural painting with, among others, the Trinity, Saint Lawrence. Further down the centaurs, perhaps recalling the horsemen of Charles Martel who were defeated in these places. On the walls on each side, six paintings on the legend of the Saint. On the left, a statue of the Virgin Mary with many paintings around it, representing for example the four evangelists. On the right, the fauna of the country with a sculpture of an ibex. On a column, Solomon and the Queen of Sheba with an animal sticking its tongue out to the ground: perhaps a representation of a camel? Scattered in the church, wooden statues, for example of Saint Peter, Saint Mary Magdalene ".

Next to it, the cemetery with its discoid stelae bears witness to a still unknown past.