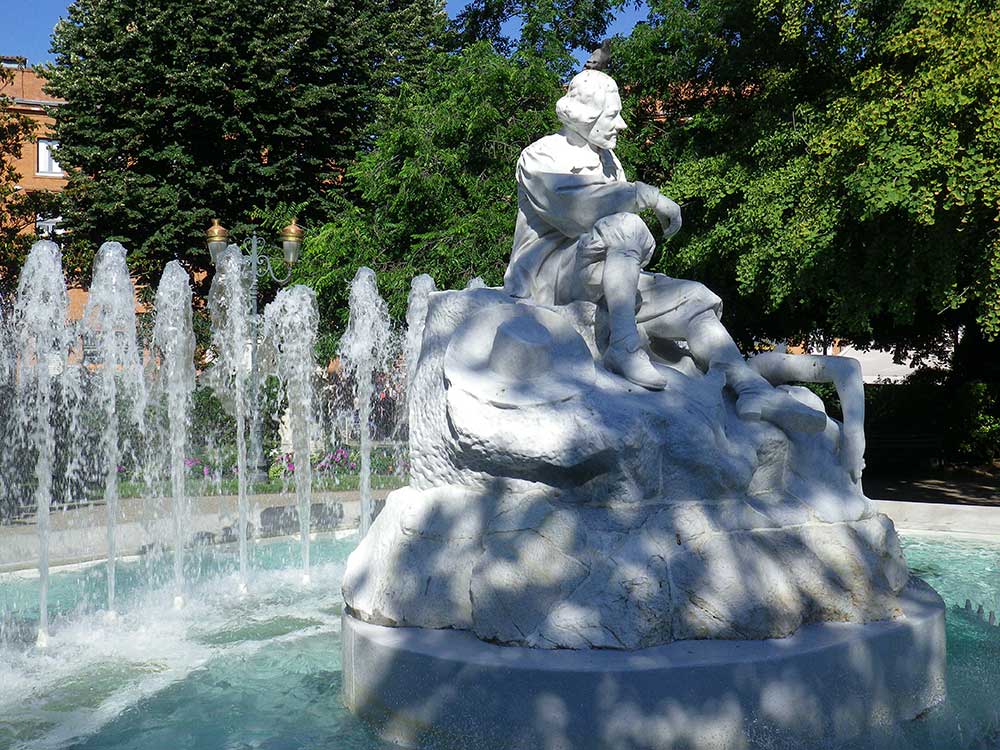 The fountain on the Place Wilson in Toulouse is dedicated to Pèire Godolin, in French Pierre Goudouli, or Pierre Goudelin. He was born in 1580 in Toulouse where he died on September 10, 1649.
An Occitan poet, he wrote in Toulouse Occitan.
Son of Raymond Godolin, a Catholic lawyer, Pèire was himself a lawyer after studying with the Jesuits.
He began his career in a Toulouse society marked by the violence of the religious wars.
Around 1600, the city was taken over by Henri IV, and the cultural elites were kept under surveillance until 1610.
At this time, Peyre Godolin asserts himself in the local poets' milieu as the most inventive, using all the registers of languages.
But, no doubt because of his independence of spirit, he did not manage to receive any reward at the Floral Games, apart from a minor one for a poem to King Henry IV, in French.
Spotted by the governor of the city Adrien de Montluc-Montesquiou, he becomes the designer of poetic and popular shows at the time of the carnivals in Toulouse.
From 1617, under the protection of the Grands locaux, Monluc and then Henri II de Montmorency, he published various pieces of baroque eclecticism, often full of double meaning and inventiveness.
The town was then marked by the disorders of the regency of Marie de Médicis which, between 1610 and 1617, allowed great freedom of tone.
The gradual return to the rule of the kingdom by Louis XIII from 1617 onwards is symbolised in Toulouse by the execution of Giulio Cesare Vanini in 1619 and by that of Montmorency, who revolted against Louis XIII in 1632.
Now without a protector, in a city affected by the black years marked by plague and war, Godolin was "victim" of a new edition of his works which appeared in 1637, against his will.
He had it replaced by a new edition published in 1638, in which he put the texts in order and corrected a passage in which he was made to celebrate the King's victory over the rebellion, where Goudouli chose to celebrate only the springtime of newfound peace.
A pension of 300 pounds was voted to him by the Capitulans at the end of his life, which he spent in the carmel.
The fountain in Place Wilson is very often the place where students, demonstrators or anglers gather.

The babies of the Black Madonna of la Daurade