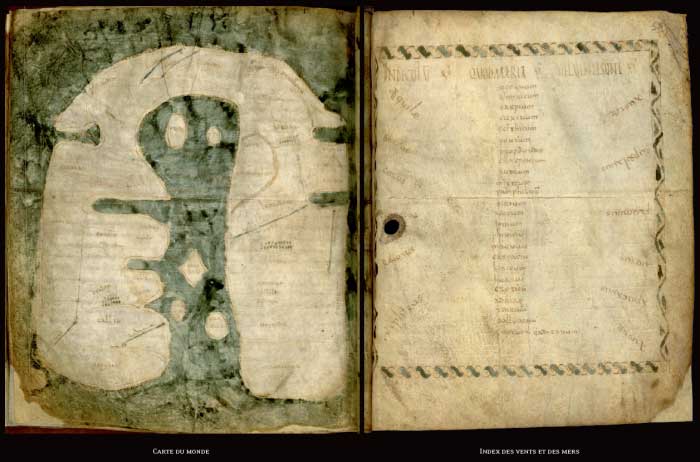 The Mappa mundi of Albi is inscribed in the UNESCO « Mémoire du monde » register.

The Mappa mundi of Albi

The Mappa mundi d'Albi is preserved in a manuscript (Ms 29 (115)) comprising 77 leaves, constituting a collection of 22 pieces of different texts, entitled in the eighteenth century "Miscellanea" (collection). It is immediately followed by an Index of Winds and Seas.

This manuscript is one of those that constituted the library of the Albi Cathedral chapter: on the back of the flyleaf, at the beginning of the book, is the ex-libris (mark of belonging) traced in a writing of the 18th century: "Ex-libris Ven. Capituli Ecclesiae Albiensis" ("Part of the venerable chapter of the Church of Albi").

It is a manuscript on parchment, probably of sheepskin or, given the southern origin of the document, goatskin. It is a relatively thick skin, with a very yellow "hair" side, with original perforations (degradation of the skin due to the animal's wounds) and an irregular size of the leaves. These elements are quite characteristic of the parchment manuscripts of the 8th century.

The manuscript is in an excellent state of preservation.

Where to see the Mappa mundi

It is located in the storerooms of the Pierre-Amalric media library, sheltered from light, humidity and dust. It is very rarely exposed for conservation reasons.

The map is included in one of the 8th century manuscripts from the library of the cathedral chapter of Sainte-Cécile. This manuscript is 156 pages long, constituting a collection of 22 pieces of different texts.

Manuscript 29 (115) and La Mappa mundi were made during the second half of the eighth century, in Gaul, probably in Albi, or in Spain as evidenced by the presence of the rivers Rhine and Rhone, and by the writing.

The Mappa mundi served, from its creation until at least the eleventh century, as a teaching document for teaching and then as an aid to meditation.

The manuscript, with this set of texts, was to serve as a reference book for a religious teacher. The making of this collection is therefore directly related to teaching. It is an example of a school textbook containing various geographical texts, (from the description of the inhabited world, the chapter of geography attributed to the Pseudo-Aethicus, to the list of winds and seas and the provinces of the Roman Empire), but also treatises on language and grammar, biblical exegesis, pastoral care, and history.

Description of the Mappa mundi

- The inhabited Earth is oblong in shape, a sort of horseshoe, with the open part showing the Strait of Gibraltar.

- It is oriented, that is to say that at the top of the page is located the East.

- The central part is occupied by the Mediterranean Sea, very developed towards the East, where you can recognize from top to bottom the big islands of Crete, Cyprus, Sicily, Sardinia and Corsica.

- The ocean (Oceanum) painted in green surrounds the earth.

Some rivers are drawn in green, the same color as the seas:

. the Nile (Nilum) and the Ganges (Ganges fluvius), mistakenly located in Africa; the Rhone (Rodanum) and the Rhine (Renus) in Europe.

The Index (Indeculum quod maria vel venti sunt) mentions 12 names of winds and 35 names of seas (only 1 name of wind and 7 names of seas are given on the map itself).

An extraordinary Museum of Sacred Art in St. Cecilia's Cathedral