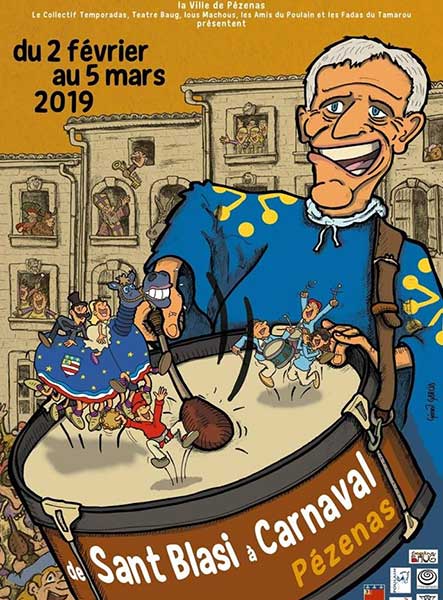 info_outline
You are here: Home / Regions / Occitany / 34-Hérault / The carnival of Pézenas and totemic animals

The carnival of Pézenas and totemic animals

As every year, Pézenas is celebrating during the month of February! From Saint-Blaise, celebration of the birth of the city to Carnival, the festival is in full swing.

A very beautiful popular, historical, pagan and humorous festival, the festival of Saint Blaise, Sant Blasi, the Patron Saint of the city of Pézenas, celebrates the end of winter and marks the opening of the Carnival festivities, a symbol of the renewal of nature and the awakening of the earth. On the program, the "wild women" throwing themselves around the men's necks and Sant Blasi on his donkey, dances, songs, meals, mass, ball...

The legends of the colt...

Since the High Middle Ages, in many towns and villages of the Hérault, the inhabitants have chosen animals as totemic symbols.
Embodying either the central character of a legend or a dominant character such as the strength of the bull, they serve as the opening to all local festivities.
In Pézenas, the "foal" is a kind of huge horse, made of chestnut hoops, covered with a blue cover strewn with stars, formerly fleur-de-lys.
In the past, the legendary beast used to beg for the poor, spectators would throw the obole from their windows as it rolled down its collar.
Led by a leader, dressed in red and white, the colt was followed by fife, oboe and "tambourine".

The legend of the foal appears late, in 1701, during the visit of the Dukes of Berry and Burgundy. In 1226, King Louis VIII, known as the Lion, who had come to war in Languedoc, stayed in Pézenas. During the celebrations given in his honour, his favourite mare fell ill. Regretfully, he entrusted her to the consuls of the city to take care of her.

On his return from the Albigensian war, the king, very surprised, saw his mare "Lo Polin", which she had given birth to, and which the city presented to him, decorated with ribbons and foliage. In order to preserve and perpetuate this event, under the king's injunction, the town had a wooden colt built whose destiny would be to participate in all public celebrations.

Another legend, later than that of the Foal, is also linked to loyalty. Thus, in 1622, during the visit of King Louis XIII, known as the Just, one of the lords of his retinue, the Marshal of Bassompierre (or perhaps the lord of Savignac) wanted to cross the Peyne. He sees a peasant woman, with a troupe skirt, who is also about to reach the other bank.

Gallantly, he offers her the help of his horse, she climbs on her rump and both of them cross the river to enter Pézenas, in front of the amused people.

When the "Madam's buttocks" bathe in the spring of Avy