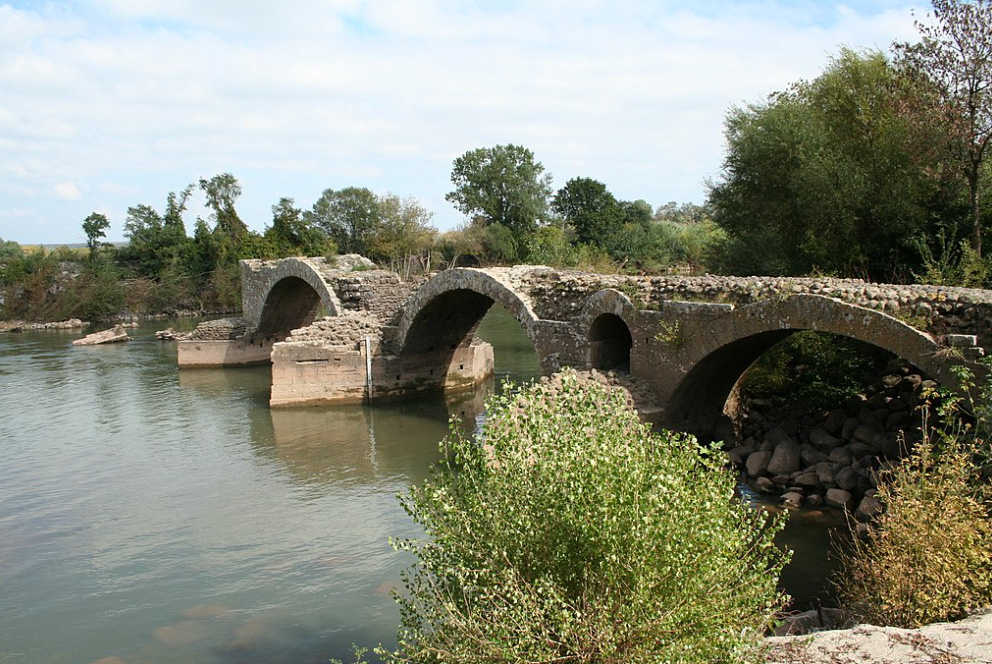 The ancient Roman Bridge of Saint-Thibéry

The bridge probably allowed the Domitian way to cross the Herault river to reach the ancient oppidum of Cessero.

It is possible that the current Grand-Rue in the old town corresponds to the old road, which would suppose a crossing of the Hérault further north of the bridge.

This bridge built in the 1st century had nine arches, making it the longest bridge built on the Domitian Way.

A deed dated 990 mentions the existence of this bridge.

In fact, it is a very old bridge but does not go back beyond the Middle Ages despite the legend.

This bridge was much used by the pilgrims of Santiago de Compostela who stopped to honour the remains of the martyrs Tiberius, Modest and Florence.

The bridge gave way under the floods of the Hérault river and its tributary the Thongue.

It was not reused until 1536, by decision of the States General of Languedoc.

The flood of January 1683 swept away an arch and the via Domitia was cut off at this point definitively.

A new bridge over the Hérault was built in 1618 between Montagnac and Pézenas.

The "moulin à Bled" (mill in Bled) from the 11th century is not far from the bridge.

The remaining bridge has parts that were rebuilt in the Middle Ages.

It was destroyed by a flood of the Herault in 1683, only four arches remain today.

The architecture of the bridge with fore- and hindquarters, large pebble apparatus and mortar blockage is an example of the skill of Roman builders.

For its construction, the Romans used the volcanic stone of Mount Ramus, near the river.

The bridge was classified as a historical monument in 1862.

The flagship restaurant... and it's running...

Pharmacy and Chapel of Mercy

When the Canal du Midi disappears!