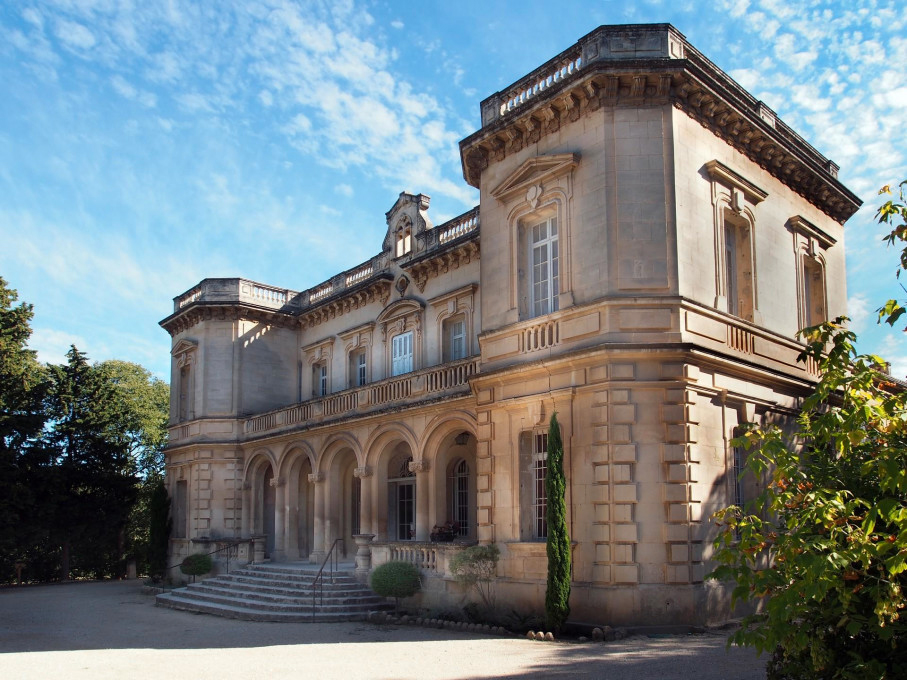 The Château de Montauban, celebrated in the preface of the "Lettres de mon Moulin", was the place of vacation, calm, rest and inspiration for Alphonse Daudet.

"Blessed house, how many times I came there, to take me back to nature, to heal myself from Paris and its fevers... ».

Alphonse Daudet in Fontvieille
Alphonse Daudet, a young Parisian journalist of Nîmes origin, returned to the south, driven by the desire to rediscover an atmosphere he thought he had lost in the capital of culture and the arts that was Paris.

He was also driven by an invitation from one of the most prestigious writers, one of the seven legendary founders of the "Félibrige", Frédéric Mistral, who had come to Paris to present one of his most famous works: "Mireïo".
Daudet first of all made a long stop in Maillane, warmly welcomed by Mistral and the ever-growing circle of Félibres. Another invitation, that of his cousin Louis Daudet and his young wife Octavie, née Ambroy, forced him to leave his new friends for Fontvieille and the Château de Montauban.
It was in this house that he met various figures such as Audiberte, the cook and maid, Mitifiot, known as Pistolet, the country guard, Quenin, known as "Lou Roudeirou", Bugasse le bayle-pastre and many others. But they all had the pleasure of the verb, that of the storytellers of Provence.
During his stays in Fontvieille, he met a good number of inhabitants, some of whom, with the help of the stories he was told at the castle wakes, became the characters of his tales.
He came regularly to Fontvieille for 30 years. His last visit took place at the end of 1891 when, despite his state of health, he came to the bedside of his old friend Timoléon, who was hospitalised in Arles.
After his visit, he decided to take the stagecoach to Fontvieille in order to contemplate one last time the vast horizon from the top of one of the mills.

That same evening, he left for Arles to take the train back to Paris.

The castle of Montauban, a former residence that has become a museum

This superb building, composed of a monumental 19th century facade attached to an 18th century farmhouse, was the home of the Ambroy family who welcomed Alphonse Daudet during his stays in Provence. Daudet made regular visits there with his wife Julia from 1863, at the invitation of his cousins, and was the setting for many of his novels. Now a museum centre dedicated to the history of the village, the Château de Montauban is today the prefiguration of a vast cultural project which already includes the permanent exhibition "Fontvieille, détour par le Moyen Âge" (Fontvieille, a detour through the Middle Ages) dedicated to the archaeological discoveries of the area.

Pending the opening in the coming years of the new museography dedicated to Alphonse Daudet, the museum hosts temporary exhibitions during the summer. During your visit, don't forget to enjoy the park of the castle with a stroll in the trees.

Fontvieille, a detour through the Middle Ages

The Louis Poumeyrol Interpretation Centre and its permanent exhibition "Fontvieille, détour par le Moyen Âge" (Fontvieille, a detour through the Middle Ages) is the result of a rich partnership between the commune of Fontvieille and the CNRS (LA3M). The exhibition offers three themes: men and places of power, society and economic activities in the towns and countryside, and the domain of the invisible between spirituality and popular beliefs. Nearly 350 archaeological objects unearthed in and around Fontvieille are on display. They mainly evoke the memory of modest everyday life: agro-pastoral tools, crafts, game tables, scissors, iron knives, terracotta crockery...

The scenography gives an important place to the image through a very rich selection of unpublished iconographic sources, extracted for the most part from regional archives. This new museographic space is above all an invitation to explore the Middle Ages in this vast territory by guiding you to the many sites mentioned.

Museum open all year round for groups by reservation (from 10 people).