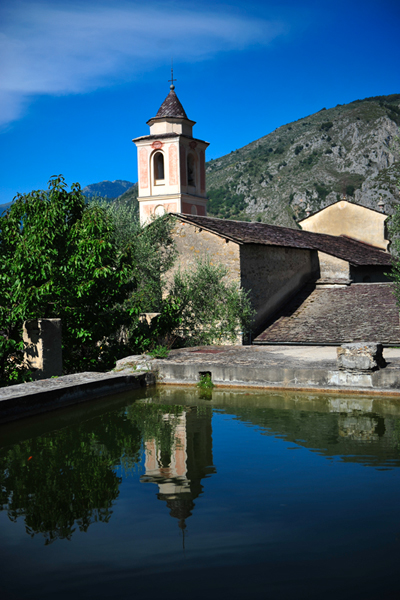 Located between Piedmont and Liguria. Saorge was a stronghold of great importance controlling the road from Nice to Turin through the Col de Tende.

In 1633, some reformed Franciscan friars founded their convent there, which today overlooks the village of Saorge and the Roya gorges.

The baroque-style church houses one of the oldest painted Way of the Crosses in the Alpes-Maritimes.

The Monastery preserves an original set of nine sundials from the 17th, 18th and 19th centuries.

The refectory benefits from a painted decoration of the 17th century and the cloister is decorated with frescoes of the 18th century illustrating the life of Saint Francis of Assisi.

Also to be seen are allegories of virtues, sundials and trompe-l'oeil?

Admire also the terraced garden, with its orchard and vegetable garden, opening on preserved mountains.

After the departure of the Franciscans in 1967, the State owner of the premises conceived the project of welcoming writers.

Since 2001, the Monastery has thus been destined to receive writers, translators, scriptwriters and composers of music. The residential part of the monument is now open to writing retreats, as well as seminars, colloquia, writing and translation workshops.

The monastery has been classified as a historical monument since 1917.

An island populated by monks: welcome to the abbey of Lérins!