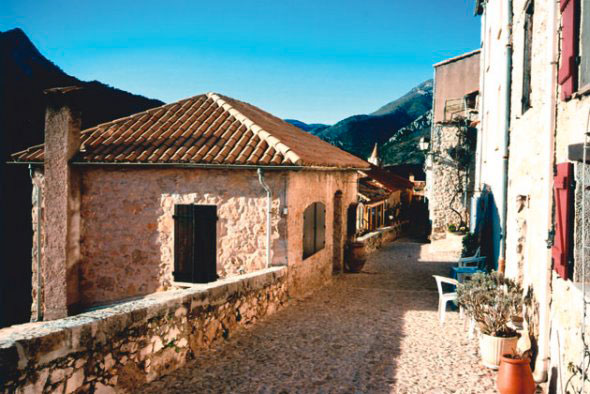 Situated at an altitude of 8OO metres, Sainte-Agnès, classified as one of the "most beautiful villages in France", is the highest coastal village in Europe.

This is why it is nicknamed "the balcony of the French Riviera". The panorama from this charming village is magnificent and allows you to admire the Mediterranean as far as the eye can see.

From Sainte-Agnès, you also have a superb view of the town of Menton and the emerging landscape of the Alps.

Its medieval alleys, spanned by vaults, are today home to artists and craftsmen.

The remains of the medieval fortified castle, built by the Counts of Ventimiglia and destroyed by order of Louis XIV, now being restored, dominate the village and a medieval garden, garden of virtues, taste, smell, Fountain of life ..., flourishes behind its walls.

Also worth seeing is the parish church of Notre-Dame des Neiges with its superb 17th century gilded wooden altarpiece and the chapels of Saint-Sébastien, of medieval origin, and Sainte-Lucie, of Renaissance style, totally restored in 1998.

The Fort of Sainte-Agnès

For centuries, in the Middle Ages or during the Second World War, the village was always used as a defence post.

Thus, a fort was built on the Maginot Line at Sainte-Agnès at the beginning of the 20th century, between 1932 and 1938. A real underground city the size of a four-storey building, now accessible to the public.

This fort was built to protect against attacks from Italy.

With its 2,000 m2 of galleries and rooms, it is built under more than 55 metres of rock. Exclusively defensive, with its artillery blocks, it was one of the most powerful works of the Fortified Sector of the Alpes Maritimes.

The fort has also kept its artillery armament under casemate, howitzer guns of 135 and 75, mortar of 81. The southern block or Block 2, the most heavily armed front casemate of the whole Maginot Line (75 mm, 81 mm, 135 mm guns), held the Italian offensive of June 1940 in check by firing a barrage on the coast, forcing the Italian troops to retreat.

Until 1990, the fort remained the property of the State. The municipality of Sainte-Agnès then acquired it to open it to the public and preserve the memory of the site.

A documented museography and a guided tour allow the visitor to discover the military installations of the Second World War: power station, neutralization room against combat gases, barracks, living quarters of the soldiers.

There is also an eco-museum of "Past Time" which evokes the traditions, objects and tools of the past from the village and the archaeological museum which highlights the objects from the excavations undertaken on the site of the 12th century castle. The latter can be visited thanks to a tourist circuit designed in an educational way.

The legends of Saint Agnes