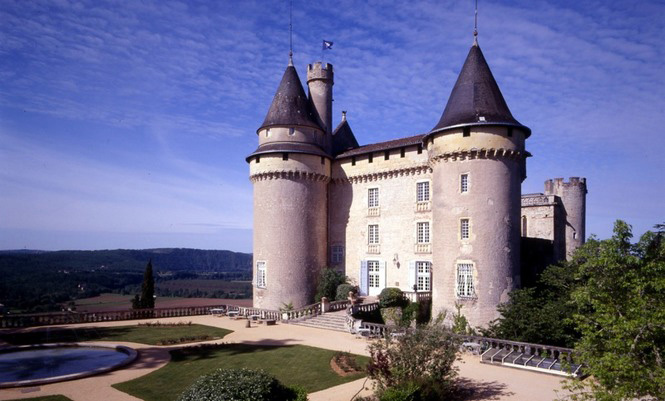 A few kilometres from Cahors, above the Lot, the castle of Mercuès was for seven centuries the summer residence of the count-bishops of Cahors. Today it is a 4-star Relais & Châteaux hotel in the Michelin Guide, a gastronomic restaurant and a vineyard producing great Malbec wines from Cahors. The estate belongs to the Vigouroux family.

During 7 centuries it was the summer residence of the count-bishops of Cahors.

In 1905, the Château became the property of the French state. One year later, it was sold to a doctor, Doctor Faure, who made it his main residence.

On September 15, 1947, the facades and roofs are classified as a Historic Monument.

Shortly afterwards, the doctor's two daughters inherited the castle and decided to open a restaurant there. The Château de Mercuès becomes for the first time a place to welcome the public.

After a few investments, he transformed the inn into a gastronomic restaurant and an internship centre for the Chrysler France company, of which he had become president in the meantime.

After his death in 1979, the succession for the castle proved to be difficult and justice had to intervene. An auction ensued, bringing together potential buyers including Alain Delon.

The court gave preference to Georges Vigouroux, a wine merchant from the region, whose project to maintain the hotel restaurant and restore the Château's vineyards had a real economic and social impact on Cahors and its surroundings.

The Barbacane and the Roaldès house, curiosities of Cahors