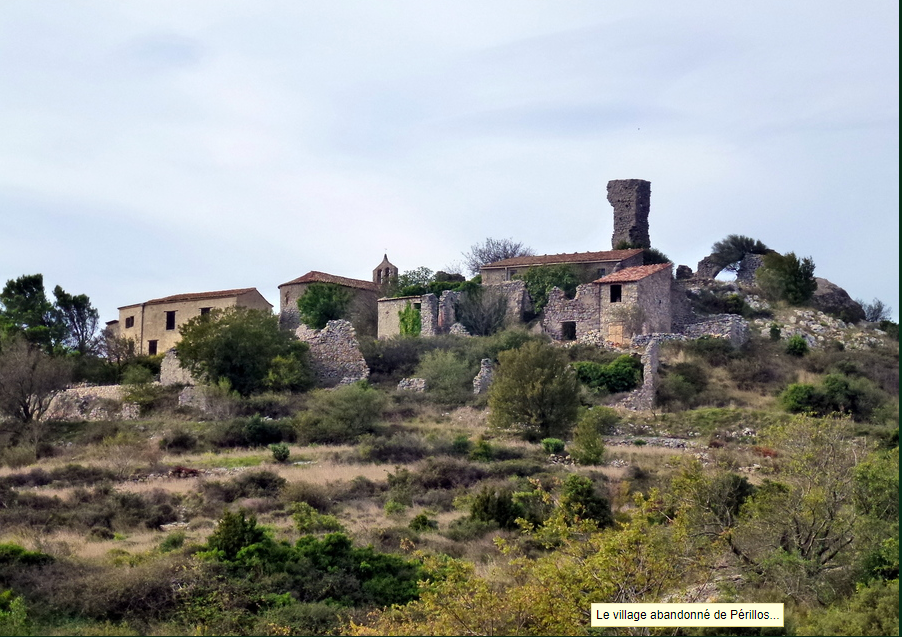 Located in the Corbières, the village of Périllos, whose name comes from the Catalan "perelloner", wild pear tree, is one of the most mysterious sites in the Pyrénées-Orientales.
If the first mention of the village dates back to the 12th century, it seems that it was occupied as early as Roman times. In 1246, the Charter of foundation of the village was written.
According to some sources, it was John I of Aragon who built the castle and the enclosure.
In the 14th century, Perillos became a real seigniory. It knew many inconveniences like the plague, the phylloxera, was ravaged by wars...
The last birth in the village was recorded in 1916.
The last inhabitant, a shepherd, left in 1970.
On November 19, 1971, Périllos was attached to Opoul to form the commune of Opoul-Périllos.

Two religious buildings are worth seeing in Perillos, the former parish church and the chapel of Saint Barbara, a little away from the village.
The church is typically Romanesque, barrel vaulted, with a single nave. The apse is semicircular, slightly larger than the nave. It has a bell tower-wall. Today it still contains a Christ from the end of the 19th century, a statue of the baby Jesus from the 18th century, another of St. Joseph also from the 18th century and the previous quest dish from the 17th century.

Ah, by the way, some say that the treasure of the abbot Saunières of Rennes-le-Château would be hidden there...

The abandoned village, clinging to the rugged foothills of the Corbières is no longer quite so. Relegated to the rank of hamlets, it was attached at the beginning of the 70s to the commune of Opoul in the Pyrénées-Orientales. The association "Terre de Pierres" restores the heritage of Périllos in the old and identical way, during voluntary workcamps which take place every summer.