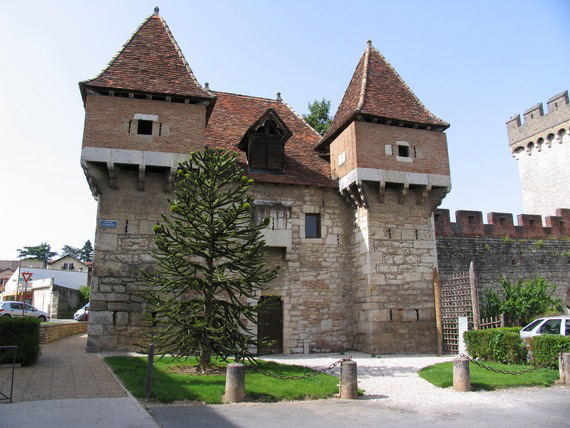 info_outline
You are here: Home / Regions / Occitany / 46-Lot / The Barbacane and the Roaldès house, curiosities of Cahors

The Barbacane and the Roaldès house, curiosities of Cahors

During the Middle Ages, a barbican was an advanced defortification work that protected a passage, door or postern, and which allowed the garrison of a fortress to gather on a salient point under cover, to make exits, to protect a retreat or the introduction of an emergency corps.
During the Hundred Years' War against the English, the inhabitants of Cahors had to protect themselves and build a new rampart to the north (the Barbacane) to protect the town and the monasteries.
A 16th century guard house, flanked by two towers, the Barbacane has walls pierced with numerous harquebusières.
This advanced fortification served as access to the city and protected the Bar Gate.

On the Place Luctérius, named after the Gallic chieftain, the last to resist Caesar, between this guard house and the tower of St. John, there is the "Closeret des Crusades", a small "secret garden" with plants brought back from the Crusades.

The Roaldès House
The Roaldès house was built towards the end of the 15th century. It is called Henri IV's house because the king of Navarre would have stayed there during the siege of Cahors in 1580.
The Roaldès family became the owners from 1661 to 1880. The owner who succeeds it adds a floor to the building.
Thirty years later, at the beginning of the 20th century, a member of the de Roaldès family bought the house, and today's owner is its descendant.
If we do the accounts, Henri IV would have stayed there for a few months, the de Roaldès family for more than 300 years...

The hotel was bought in 1912 by a member of the Roaldès family. Work is undertaken to reveal the half-timbering on the south façade. The top floor of the south facade was transformed into a "soleilho". The left part of the facade has been redone.

The hotel is classified as a historical monument by the list of 18623.