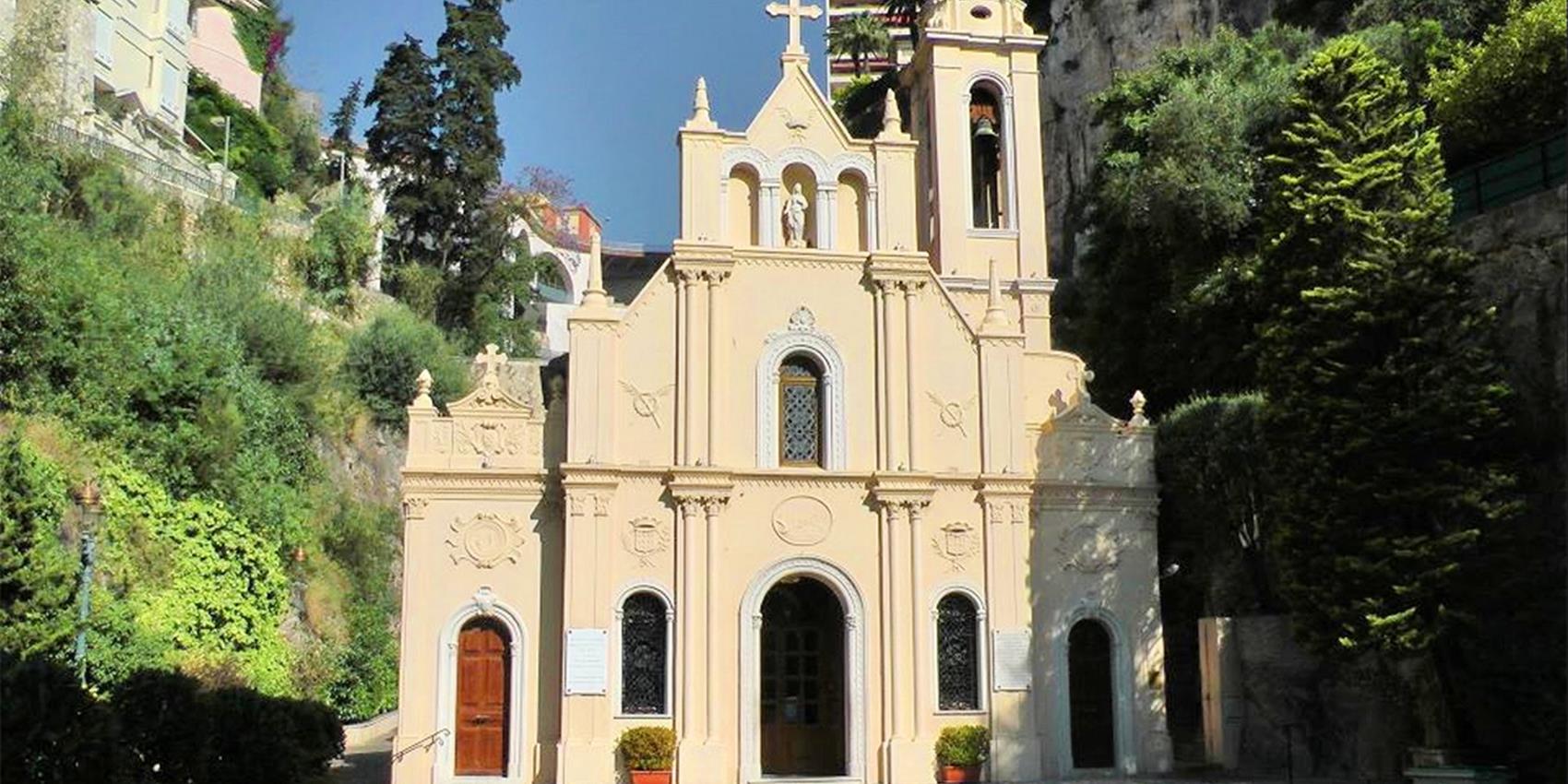 info_outline
You are here: Home / Regions / Monaco principaty / The Church of Sainte-Dévote, a Monegasque landmark

The Church of Sainte-Dévote, a Monegasque landmark

This 11th century votive chapel is dedicated to the Patron Saint of the Principality and the Princely Family.
Commissioned by Prince Rainier III to the sculptor Cyril de La Patellière, the official statue of the Saint was inaugurated on January 26, 1997 in the presence of the princely family and the artist.
It was built, before 1070, in the hollow of the "Vallon des Gaumates" at the entrance of which, in the 4th century, the frail skiff where "Devota", St. Devote, was lying, ran aground.
Over the years, the church has undergone numerous enlargements and restorations...
The present church was built under Prince Charles III and inaugurated on January 25, 1871. Three medallions represent scenes from the life of the saint while a shrine containing the relics is exposed on the altar dedicated to her.
The stained glass windows are by Nicolas Lorin of Chartres. They were destroyed during the bombing of Monaco during the Second World War and restored by Fassi Cadet of Nice in 1948.
Each year, on January 26, the eve of the feast of Saint Devote, a boat is burned at dusk, as part of the ceremonies of a traditional cult still fervent

At the very beginning of the 4th century, in Corsica, at that time a Roman province, the Roman governor Diocletian ordered the great persecution of the Christians.

A young Christian woman, Devote, was arrested, imprisoned, tortured and died without denying her faith. After her death, the governor of the province ordered her body to be burned, but some Christians took it away and placed it on a boat bound for Africa where, they thought, it would be given a Christian burial.

In the first hours of the crossing, a storm arose. It was then that a dove came out of Devote's mouth and guided the boat safely to Monaco, where it ran aground in the Gaumates valley, the site of the present-day church of Saint Devote. It was the sixth day before the calendas of February, which corresponds approximately to the date of January 27.

Then came the first miracles...

An oratory marked the site of the tomb. The faithful, inhabitants of Monaco or sailors passing through, came to pray there in great numbers and the first miracles were performed. However, one night, a man stole the relics of the saint with the intention of negotiating their benefits. The sacrilege was short-lived, as a group of fishermen pursued the thief and caught him with a few strokes of the oar. The thief's boat was then burned on the beach as an expiatory sacrifice.

It is also said that in the 16th century, during a war against the Genoese and the Pisans, Saint Devote protected Monaco: the enemies were besieging the fortress. For more than six months, their attacks were repelled by the Monegasques to whom Saint Devote had appeared, assuring them of divine protection and victory. On March 15, 1507, the Genoese abandoned the siege.
Since 1924, under the reign of Prince Louis II, a boat is burned on the evening of January 26.

The Church of Sainte-Dévote, a Monegasque landmark