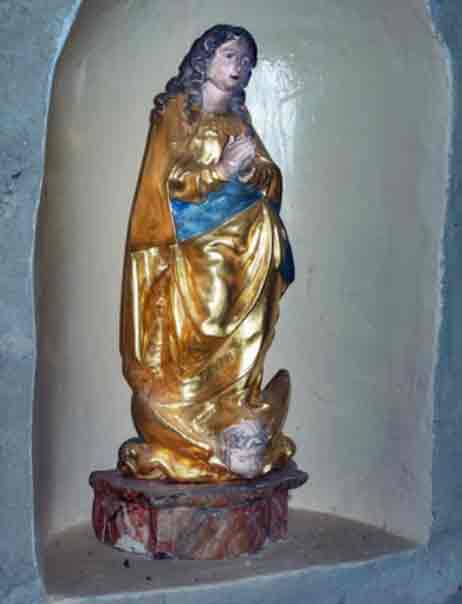 info_outline
You are here: Home / Regions / Occitany / 11-Aude / The Pregnant Virgin of Cucugnan

The Pregnant Virgin of Cucugnan

If the village of Cucugnan is very famous thanks to its parish priest, it is also well known for its statue representing the pregnant Virgin Mary which can be admired in the right wing of the transept of the church of Saint-Julien-Sainte-Basilisse.
This 17th-century gilded polychrome wooden statue represents the Virgin, with her belly bent.
However, this representation is not so unique since it is found in several sites in France and a dozen photos are on display in the nave. Today, an exhibition on "The Virgins in France" is free and open to all inside the church.
In 1930, the parish priest of Cucugnan, who was reluctant to exhibit the Virgin thus represented, sent the statuette to Carcassonne, to the Departmental Conservation of Antiquities and Objects, "because of its special attitude, in consideration of
which he couldn't show off to his parishioners. »
It was repatriated in 1945, under pressure from the parishioners, following a violent hailstorm on the village.
This return is temporary. In February 1958, the statue left for the Castle of Lourdes to take its place in an exhibition on the Pyrenean Virgins on the occasion of the centenary of the apparitions of Lourdes.
Back in the church of Cucugnan, it was stolen in 1981, then recovered by chance and luck, in a locker at the Lille train station.
Since then, the pregnant Virgin of Cucugnan watches over her village, in the church of Saint-Julien-Sainte-Basilisse, a model couple for the Catholic Church. It has been classified as a Historic Monument since 25 February 1959.
In neo-gothic style, the choir and chapels of the church also house a group of wooden statues from the 17th century, including that of Saint Agathe, the patron saint of the village.