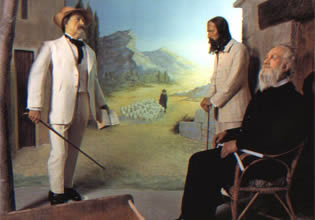 The Grévin Museum of Provence

The Musée Grévin de la Provence, nestled in the old city center, at the foot of the Château de l'Emperi, has been offering, since July 3, 1992, a great journey through time.
Twenty-seven centuries are thus crossed in sixteen perfumed scenes with sound and many special effects with audio guide, which plunge the visitor in the history and the legends of Provence.
The theme present and recurring in each scene is "Woman and Water", the two sources of fertility.
From the Roman invasion to the court of King René, from the irrigation works of the water engineer Adam de Craponne to the Master of Maillane and of the Félibrige, Frédéric Mistral, up to Marcel Pagnol's cinema, this journey through time is accompanied by numerous special effects such as the breath of Mistral and the song of the cicadas...
Without forgetting artists like Puget, painters like Paul Cézanne, poets like Pétrarque, Alphonse Daudet, scientists like Jean-Henri Fabre, warriors like the Roman Caïus Marius, the vice-admiral of France Pierre-André de Suffren, politicians and show-business actors.
Among the many scenes presented, let us quote:
- In 40, the Christian women Marie Jacobé, Marie Salomé, Marie Madeleine and Marthe land on the shores of the Camargue to carry the divine word, the message of love and faith.
- In 1177, Saint Bénézet built his "Avignon Bridge" and still today "we all dance in circles".
- The tarasque is defeated by Saint Martha who delivers it to the crowd in jubilation.
- Adam de Craponne in the 16th century, the benefactor of Provence, diverted the course of the Durance and thus found a way to irrigate the Crau which finally became fertile.
- Frédéric Mistral, Alphonse Daudet and Antoine Blaise Crousillat, the félibre from Salon. A quarrel of more than ten years separated Mistral from Daudet because the latter had been inspired by the family drama of the Maillane native to write "L'Arlésienne".
They discussed their respective works in Maillane in 1870.
Finally, let's remember that cinema was born in Provence in 1895. How can we not evoke Marcel Pagnol, also born in 1895? Sitting next to Raimu, he is shooting a version of Manon des Sources, the one directed by Claude Berri, with the features of Emmanuelle Béart, who is exposed to the fevered gaze of Ugolin (Daniel Auteuil), while the "papet" (Yves Montand) watches the horizon leaning on his cane.
The opening of this museum was sponsored by the singer Mireille Mathieu and the animator Jean-Pierre Foucault, children of the country.

The Ancient City of Glanum updated