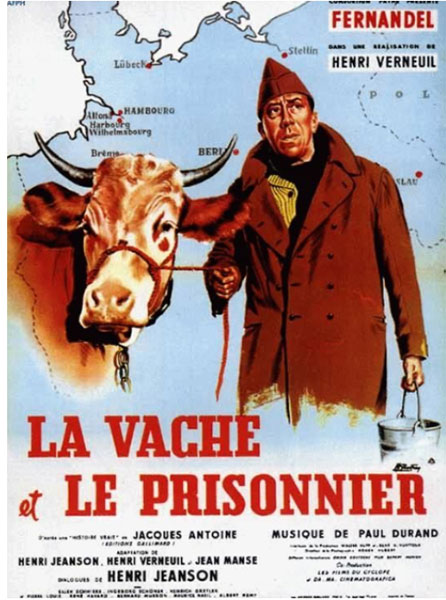 Fernandel, who was born in Marseilles on 8 May 1903 and died in Paris on 26 February 1971, was a French actor, comedian, singer and director.

Born in the music hall, he was for several decades one of the greatest stars of French cinema, a true box-office champion who attracted more than 200 million spectators in cinemas.

An emblematic comedian of the cinema before and after the Second World War, many of his films have become classics, such as "Le Schpountz", "L'Auberge rouge", "Ali Baba et les Quarante voleurs" or "La Cuisine au beurre", as have several of his characters, such as Don Camillo.

He also successfully played more dramatic roles, such as in "Naïs", "The Cow and the Prisoner" and "Heureux qui comme Ulysse".

As a popular singer, he also left an important discography, scattered with classics such as " Félicie aussi ", " Ignace " or " Le Tango corse ".

Recognizable thanks to what he himself called his "horse's mouth", he acquired such international popularity that General de Gaulle declared at a reception at the Elysée Palace on 3 May 1968 that he was the only Frenchman who was more famous than [him] in the world1.

1 His success never wavered and Marcel Pagnol said of him after his death: "He was one of the greatest and most famous actors of our time and can only be compared to Charlie Chaplin.

Faced with managing the ever-increasing revenues associated with their success, Gabin and Fernandel are looking to protect their savings from inflation. Fernandel chose real estate, Gabin bought land and told him, "Buildings are falling apart. Land stays. »

Bound by friendship and great esteem, the two actors created in 1963 their joint film production company, the Gafer, a name formed by the first syllables of their stage names.

"We did well not to take those of our surnames," Fernandel explains. Gabin is indeed named Moncorgé and Fernandel Contandin (that would have made Moncon).

Along with Louis de Funès, Bourvil and Jean Gabin, Fernandel is one of the French actors who attracted the largest number of spectators to the theatres: around 202 million between 1945 and 1970.

His films with the largest audience