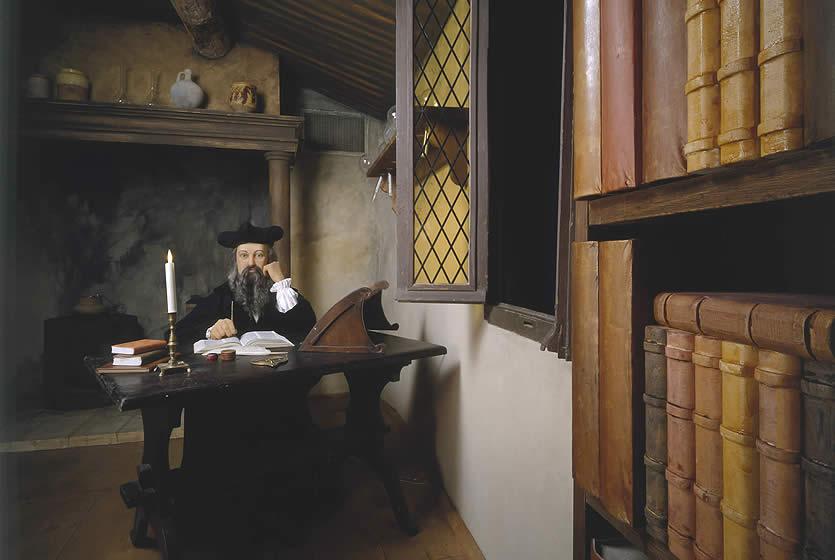 info_outline
You are here: Home / Regions / Provence Alpes Côtes d'Azur / 13-Bouches-du-Rhône / The Museum of Nostradamus and the Garden of the simple

"La Maison de Nostradamus" is a museum opened since 1992 in the house where Michel de Notredame, known as "Nostradamus" (1503-1566), lived from 1547 to his death, and where he wrote his famous "Prophecies" in 1555.
Located in the heart of the old center of the city of Salon-de-Provence, at the foot of the Château de l'Empéri, the Museum is built around this enigmatic character who scrutinized the past, the present... and the future until 3797.
The accent is put on the multidisciplinary nature of his gifts, Nostradamus devoting himself to Medicine, Pharmacy, Astrology, Humanism, rubbing shoulders with Rabelais, Catherine de Medici, Charles IX, Marguerite de Navarre and many others... discussing the new ideas of the Reformation, quoting the Bible, evoking the Hebrew Kabbalah or weighing up the interest of the first notions of hygiene put into practice during the great epidemics of plague.
To enter his universe, several possibilities are offered: a first space retraces, during 40 minutes, in 10 sound paintings, with a small planetarium, the life of Nostradamus as well as his scientific and philosophical work, from his childhood in Saint-Rémy-de-Provence, his training as a doctor which allowed him to eradicate the plague, to his predictions, passing by his office in Salon-de-Provence or the meeting with the Queen.
The Museum includes a second space with "temporary exhibitions and a bookshop where books on the 16th century, the characters of this period and the subjects dealt with by Nostradamus are offered, as well as educational files.
Concerning his work, only reproductions of the original texts are available (Prophecies, Spells and Jams, Treatise on Hieroglyphics, Paraphrase of Galen...).
Souvenirs are also presented in the store.
The Nostradamus Museum has been recognized as a "Writer's House and Literary Heritage" since 2006.

The "Simples" being medicinal plants, which can be collected in the hills and used "simply", this Garden was created in 2003, in the heart of the Castle of Emperi which dominates the city, on the occasion of the 500th anniversary of the birth of the illustrious doctor renowned for his effective fight and his medicines against the plague.

This garden is composed of plants that he used in his recipes, grouped in plessis (braided branches of chestnut trees), each square creating a link with his texts: square of jams, shadings, dyers ...

From being a temporary garden, this Garden of Nostradamus has been transformed into a "Garden of History", a pretext for all sorts of activities and accessible to all.

Documents about it are available at the Nostradamus Museum, at the foot of the castle.