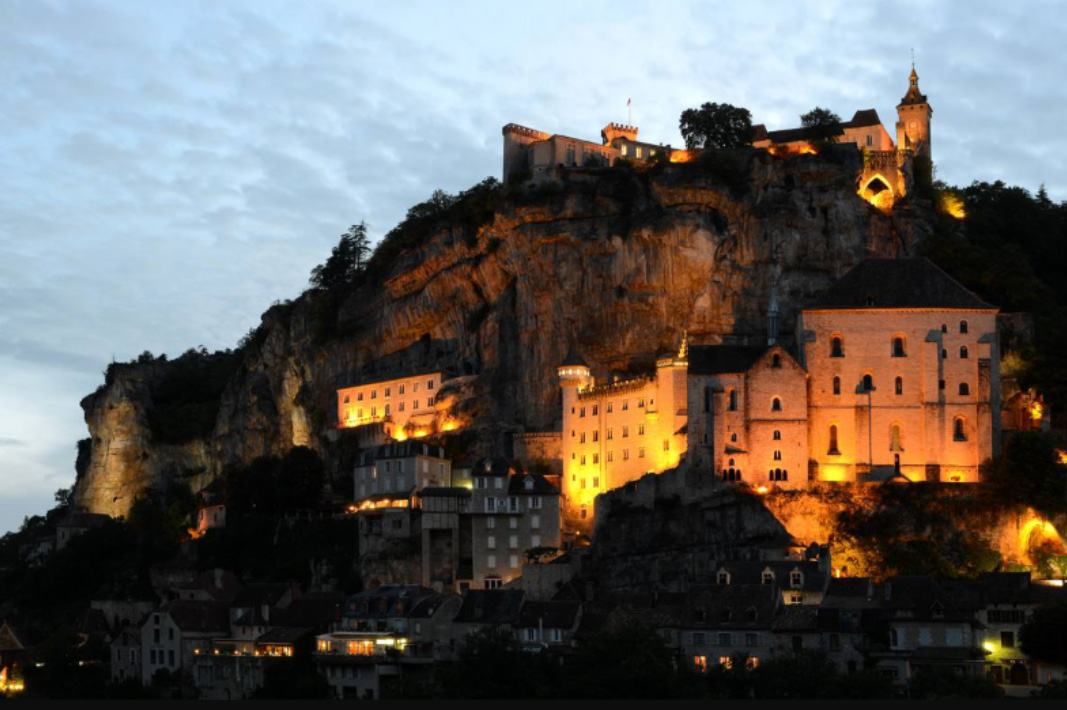 info_outline
You are here: Home / Regions / Occitany / 46-Lot / Rocamadour, the work of a brilliant architect, sacred from all eternity.

Rocamadour, the work of a brilliant architect, sacred from all eternity.

Built in successive stages, Rocamadour, a medieval town clinging to the cliff, above a canyon where the river Alzou flows, has aroused the admiration of visitors for centuries.
Already in the Middle Ages, pilgrims came from all over Europe to pray in the town, the village housing the relics of Saint-Amadour and being the sanctuary of the Black Virgin.
Rocamadour is crossed by a street, the rue de la Couronnerie, very lively, lined with shops and beautiful houses.
The visitor then arrives in front of a monumental staircase of 233 steps that rises up into the heart of the city, a square that hosts seven churches and chapels including the Notre-Dame Chapel, a pure marvel.
It contains the Black Madonna, a small black wooden statuette, "frail but giving off an astonishing spiritual strength".
The Basilica of Saint-Sauveur and the Crypt of Saint-Amadour, both listed as UNESCO World Heritage sites for their importance in the pilgrimage of Saint-John of Compostela, are also worth seeing.
Rocamadour is also worth a visit for its castle which offers an extraordinary view of the city.

The origins of Rocamadour are quite mysterious. The very ancient human habitat and the caves decorated with paintings bear witness to a prehistoric life, and specialists evoke the presence of a pre-Christian sanctuary.
A legend even attributes the origin of the pilgrimage to Zacchaeus, who came to retreat there. More likely, but without proof, a tradition tells that a hermit, Saint-Amadour, would have spent many years in this place which was called the Dark Valley and which would then have changed its name.

What is certain is that, even before the year 1000, people came to this place to pray to the Virgin Mary.

The Book of Miracles

According to the Book of Miracles written in 1172, Our Lady of Rocamadour cured diseases, freed prisoners, saved sailors and also protected during wars.

It is for this reason that we can see models of suspended ships and prisoner's irons in the Notre-Dame chapel.

The crowds that came to Rocamadour came from all over Europe. The greatest Saints and Kings rubbed shoulders with the criminals who made a pilgrimage of atonement, getting rid of their chains. Survivors of shipwrecks at sea would deposit ex-votos of ships and the cripples and sick healed would hang their crutches there.

The Legend of Durandal

In the 8th century, the valiant knight Roland, Charlemagne's nephew, fought a battle in Roncesvalles against the Saracens. During this famous battle, he is seriously wounded. Seeing his death approaching, Roland tries to break his sword named Durandal against a rock to prevent the enemy from taking it. But the blade remains intact. Roland then called upon the Archangel Saint Michael and threw his sword with all his might. It miraculously crossed several hundred kilometres to be planted in the rock of Rocamadour where it can still be seen today.